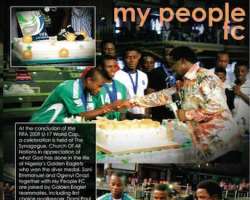 Sani Emmanuel, the former Nigerian football starlet whose recent social media plea for help to fund an operation for his career-threatening injury made headlines, has revealed a stunning plot against prominent Nigerian Pastor TB Joshua by some ‘big men of God’.

In a tell-all post on Facebook , Emmanuel revealed he received a phone call from “a woman named Bisola Johnson” who spoke to him for over two hours, promising substantive financial benefits if he agreed “to testify against TB Joshua”.

“She spoke on her relationship with some big men of God,” he asserted, adding they would assist him to “raise up to 10 million naira for my surgery” on the condition that he damningly reveal TB Joshua used his “star” for a ritual.

“She said I had to change the name Emmanuel as the name is cursed,” Sani continued, revealing Johnson tried repeatedly “to convince me that TB Joshua is not a real man of God.” Emmanuel provided evidence by uploading an audio recording of one of his conversations with Johnson onto SoundCloud where she can be heard coaching him on how to respond if asked about his injury and Joshua’s role in not alleviating it.

Sani’s rise to footballing relevance during the 2009 U-17 World Cup, where he won the coveted Golden Ball as the tournament’s best player, was well connected to TB Joshua.

The young footballer played for My People FC, the grassroots football academy founded and funded by the cleric, revealing in interviews then that he worked as an “altar boy” in The Synagogue, Church Of All Nations (SCOAN).

Before Sani and his team-mate Ogenyi Onazi were selected to represent the Golden Eaglets, Joshua also sponsored their trip to Sweden to play for a lower-tier team.

Clearly miffed at Johnson’s smear campaign against the cleric and her attempts to embroil him in it, Emmanuel stated that he “grew up in the Synagogue” and described Joshua as “the best dad in the world.”

“If not TB Joshua, I would have ended up playing street football at a village called Aso Pada in Abuja,” the footballer continued, adding “he raised me from nobody to somebody.”

Sani also revealed that his social media plea for help led to probing questions from people familiar with his connection to Joshua.

“I have received calls and messages from people, asking why couldn’t the man of God help me or heal me,” he stated, explaining that Joshua is just “like you and I” but simply being “used by God”.

“A prophet is not a magician. I believe my time of healing will surely come,” he concluded, before revealing he had been distant from the cleric for a long time and desired to “come back home”.

Days earlier, Emmanuel revealed in an Instagram post that his former team-mate Ogenyi Onazi had paid N1.4m ($4,000) to enable him to undergo surgery for achilles tendonitis which had plagued him since the onset of his career.

After his breakout performances at the FIFA U-17 World Cup, Emmanuel had trials with Chelsea and Tottenham before a brief stint at Italian side Lazio but persistent injuries hampered him from making any mark.

Sani’s revelation is not the first-time prominent clerics have been implicated in efforts to publicly discredit TB Joshua.

Earlier this year, a video on Emmanuel TV’s YouTube channel chronicled the confession of an ex-militant named James who admitted he was paid “huge amounts” by a Nigerian pastor to “lie against TB Joshua” and malign his ministry in “a public crusade”.

Bisola Johnson, the initiator of the phone call with Sani, has been a long-term nemesis of Joshua, brazenly accusing him – without evidence – of perpetuating all manner of atrocities within his popular church.

Johnson, who worked in The SCOAN for several years before turning against her former boss, has previously admitted on camera to being mentally unstable and was recently accused of fraud by a US-based businessman.