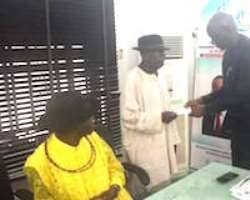 Communities in Delta state have been charged to live peacefully amongst themselves to enable them attract the dividends of democracy to their areas.

The Secretary to Delta state Government (SSG), Mr Chiedu Ebie gave the charge when he presented N18 million cheques to victims of the 2014 Ibrede Community Crises, Ndokwa west council area of the state.

Mr Ebie said dialogue should always be engaged during misunderstanding between parties instead of violence as it has shown that no meaningful development could be archived during the time of crises.

The SSG said the State government was not unmindful of the hardship experienced by the persons affected by the community crises in 2014, hence His Excellency Senator, Dr Ifeanyi Okowa approved funds for fifty four individuals that were affected by the crisis as well as four families that lost their loved ones.

The president General of Isoko Development Union Chief Iduh Amadhe commended the state government for its commitment and support to the welfare of the victims and promised that the union would continue to partner with the state government to ensure that the peace currently being enjoyed in Isoko nation is sustained.