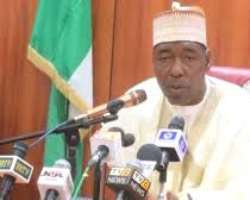 The Commissioner of Transportation, Abubakar Tijani, disclosed this in Maiduguri Tuesday.

Tijani also said that the amount would be expended on the rehabilitation and upgrading of the terminus into a befitting edifice.

He added that part of the money would also be used to construct a lodge of 50 rooms within the premises of the motor park to enhance quality services to passengers as well as create employment opportunities.

The state Commissioner further noted that the government has adopted proactive measures to transform the transport sector of the state and also check the alleged operations of some illegal motor parks in the state capital Maiduguri that promote criminal activities.

“We are going to recruit 100 vanguards and train them under the newly established Borno State Management Agency with a view to addressing the recklessness of the tricycle operators in the state.

“The vanguards will work with the VIO’s in every nook and cranny in the state to arrest those who violate traffic rules and regulations.

“We also have plans to capture all the tricycle riders in the state so that henceforth we can trace and fish out the bad elements among other users.

“This issue of lorries entering the state capital is also one of the challenges that we are yet to address. We have already taken steps to redeem the forgotten Njimtilo Trailer Park.

“We will put it in use to prevent the trailers from coming into the town to create traffic congestion", Tijani said.

The Commissioner also said that the ministry, through a partnership with the security agencies had adopted proactive measures to checkmate lorries bringing unwholesome goods that are detrimental to peace and security in the state.

“Thank God the issue of the road has received a lot of attention with the intervention of the federal government and Alhaji Aliko Dangote.

“The road from Dikwa to Gamborun Ngala has gotten approval. Work has already commenced from Bama to Banki which will also be taken care of by Dangote.

According to him, the opening of the roads when rehabilitated would boost commercial and socio-economic activities in the state.