With Love From Donald Trump 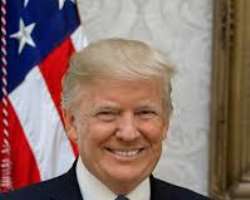 President Donald John Trump cuts the picture of a white supremacist and racist. During the campaign for the White House in 2016,he told the nation that he was going to build a wall to prevent desperate Mexicans from crossing the border into the United States of America. He also said that the cost of the wall would be borne by Mexico. He said that Nigeria was a shithole and that he would deport all illegal immigrants from the most populous African nation because they were stealing American jobs. His campaign team portrayed Nigerians as criminals. He cancelled the Deferred Action for Childhood Arrivals (DACA) and created panic among the illegal immigrant community especially those from Mexico and Latin America.

He refused to visit Africa so far and treats the continent’s leaders with utmost contempt.

It was therefore a huge surprise when he retweeted the portrait of himself drawn by a Nigerian artiste who goes by the twitter name Creative Doks. The creative artist said that it was his second work of the President and that he spent about seventy hours using a ball pen to achieve it and the portrait stood at 24 by 21 inches. He capitalized on the President’s love for Twitter by tagging him, his son – Donald .J. Trump Jr and the official account of the President of the United States. The Nigerian artist begged for retweets till Trump saw it and his reply went thus: “Not only did I see it Doks_Art, I think it is fantastic. You are a wonderful artist, never give up your dream!”

This is the second time that Trump is actively engaging an Africa-related tweet. Months back, he retweeted a video of a female football juggler.

The exploits of the Tanzanian lady further went viral following which she was interviewed by a number of international news outlets.

The exploits of Creative Doks and the unnamed Tanzanian lady shows the innovativeness of Nigerians and Africans when they go abroad. Agreed, a few are into crime and all manner of undesirable activities but they represent a miniscule fraction of the number who through the dint of creativity and hardwork are doing the nation and continent proud.

Trump may be nationalistic in wanting to control the influx of immigrants into Uncle Sam which is only natural as he is protective of the American economy. However, America was built and is sustained by the labour of immigrants. Ultimately, all Americans including himself were descendants of immigrants and he needs to be cautious as to how he vents his anger and bile on innocent immigrants who just want a better life for themselves and their loved ones.

If Africa didn’t have the curse of bad and corrupt leadership with the tacit support of the west, most African immigrants in the United States would have opted to stay back home instead of going through the humiliation of either becoming illegal immigrants or living below the breadlines just to bring home the bacon. The underdevelopment of Africa is in the best interest of the west as it ensures that the continent’s best brains flee to their country on economic exile.

Great African names like Chimamanda Ngozi Adichie, Biodun Jeyifo, Philip Emeagwali, Ngugi Wa Thiongo, Bayo Ogunlesi amongst many others won’t have taken up permanent residence in the US if things were right back home and the governments were more responsible and sensitive to the needs of her citizens.

Philip Emeagwali brought into the US thirty-five of his closest relatives to enjoy and live the American dream. Millions of Africans live in the US and have happily accepted her as their second home as home to them is simply wherever their hearts and minds find peace. The father of African literature, Professor Chinua Achebe had an accident in 1990 while on the road for an official Nigerian assignment. He was abandoned by the same government he so laboured to serve but America accepted him and gave him tenured lecturing appointments in their universities and he happily transited to the great beyond in 2013 from there. During the Abacha years when activists were hounded and murdered, Professor Wole Soyinka found succour in the US and lectured in some of her best universities and was given a green card to boot. The best of minds are attracted to the US as it’s a country where things work and despite its capitalist system, is still humane and cares deeply for all her citizens as well as immigrants.

The deep seated hatred of Trump for Nigerians didn’t stop him from commending Creative Docs showing that your face may not be liked but the works of your hands will still be deeply appreciated – a testament to the beauty of diversity and inclusiveness in Uncle Sam.

If Nigeria were a country that worked, Creative Docs would have drawn the portrait of Buhari and tagged him on twitter. The critical question to ask is will the President even give a damn about him? He simply knew where his bread was buttered by drawing the racist Trump.

I greatly commend Trump for greatly encouraging Creative Docs and hope that his endorsement will lead to financial independence from the creative artist. God bless America; indeed it’s God’s own country.