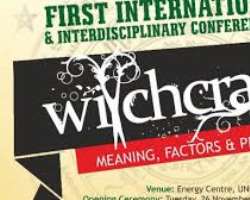 No major action like going to war, conquering a fresh territory etc was taken without the recourse to the mediums. The priests and priestesses of these mediums were highly influential even more than the King or the leaders as they were the direct link to the invisible gods.

Even after the advent of science and technology as well as Christianity, witch craft still plays a huge role in the affairs of man. The most popular author in the United Kingdom is J.K Rowling and her best seller ‘Harry Potter’ is filled with the effect of witch craft in the lives of mortals. Indian-British writer, Salman Rushdie’s second book ‘Midnight’s Children’ which won the 1981 Booker Prize is filled with magical realism. Ben Okri’s ‘Famished Road’ which won the 1991 Booker Prize and which made him the youngest winner at the time was a book filled with witch craft as well as falling into the genre of magical realism.

The BIC Ijomah Centre for Policy and Research Studies at the University of Nigeria Nsukka wanted to host an international conference on witch craft which was dropped on the orders of the Vice-Chancellor, Professor Charles Igwe. The event which was scheduled to have been held on November 26 this year was suspended indefinitely.

There was a loud opposition from the Christian folks especially by the Pentecoastal sect which went into dry fasting and prayers in their bid to prevent the event from holding.

I find the opposition rather ludicrous as the holding of an event doesn’t necessarily mean an endorsement of it. Let us use journalism as a case study. If I am a crime correspondent, does that mean that I endorse crime? If I am abroad where the LGBT has sturdy roots and I am covering that beat, does that make me a supporter of it? Does the organization of a conference on crime mean that the organizers and promoters support criminal behaviour?

The lack of tolerance for divergent religious views is appalling and leaves a sour taste in the mouth. Agreed, Christianity and Islam are the two dominant religions but that doesn’t mean that other ones do not exist.

The conference on witch craft doesn’t tacitly endorse the subject. As an academic discourse, it wanted to deeply probe the subject matter in depth as it’s an issue that pervades the entire society. Is it not in this same country that people fast and bind the witches and wizards in their villages? Don’t innocent kids in some part of the country get killed or abandoned simply because they have been branded as witches and wizards? What is wrong with critically exploring this issue so as to better understand its nuances which will lead to a better and peaceful coexistence among people of diverse faiths?

Ifa which is condemned as fetish by fanatical Christians is being studied in other parts of the world going as far as Brazil and we cannot be tolerant enough to have a simple talk shop on this issue that looms large in our day to day living.

Despite our ‘Christian’ faith, didn’t we study about witches and wizards in our school days? We all read William Shakespeare where Macbeth was deceived by the three witches which set the stage for his unbridled ambition to become the King. Many of his plays highlight the role of witches in the lives of man. Why didn’t our ‘prayer houses’ call for the boycott of Shakespeare in our schools? The Holy Bible is filled with witches and we recall that Saul, the first King of Israel visited the witch at Endor after he fell out of favour and grace with God. Why hasn’t the Bible been banned?

The same way many Nigerian parents are shy to discuss sex with their kids is the same way we are shying away from discussing a burning issue that affects our daily existence.

As long as there is ignorance on this issue, many will continue to die and suffer in silence. Let’s spare a little thought for the little children in the countryside who are unjustly accused of being either witches or wizards. Such a discourse as the one that would have held last month would have set the chain in motion for a change of mindset especially in the rural areas where the affliction is most prevalent. How many more lives will be saved if only the issue is dissected thoroughly with the message being communicated effectively to the grassroots?

The new global mantra is diversity and inclusiveness – this must be reflected in our day to day living as one of the causes of conflicts is the intolerance or misunderstanding of people that have different religious beliefs from ours. We must shun all forms of bigotry if we are to move this great nation forward.

Tolerance should be the new normal.
Tony Ademiluyi writes from Lagos and edits www.africanbard.com