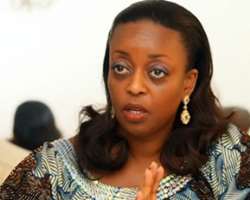 Diezani Alison-Madueke has scored firsts in several endeavours. In 2006, she became the first woman to be appointed a Director in The Shell Petroleum Development Company where the board appointed her as the External Relations Director after spending less than fifteen years in the Anglo-Dutch country. She went on to score a first by being the first female Minister of Transport in 2007 under the late President Umaru Musa Yar’adua and later Petroleum under former President Goodluck Ebele Jonathan. Her brilliance was not in doubt as she was a Chevening Scholar at the Cambridge Judge Business School where she did her MBA while still in Shell in 2003.

Jonathan as the Vice-President elect was the one who actually sold her candidacy to his then boss opining that there were very few Bayelsans who possessed her intimidating credentials. Naturally, expectations were very high as even her reclusive husband, Rear Admiral Alison Madueke told her to protect the family name by not dipping her hands into the cookie jar.

Her five year stint in charge of the cash cow called the petroleum industry was dogged by controversies. The anti-corruption website, Sahara Reporters first blew the story of the sleaze in that sector and naming all her alleged associates including Kola Aluko and Jide Omokore but the soft spoken paragon of beauty vehemently denied all the allegations. She was one of the most powerful members of the Jonathan cabinet and her word was law in her native Bayelsa state. There were even rumours being peddled by pundits that she had her eye on the gubernatorial seat in Yenogoa.

After the general elections of 2015 which saw the ouster of her then boss – the first of its kind in Nigeria, she knew she had to act fast as the new administration came to power on the anti-corruption, change mantra. She knew she would be a guest of the Economic and Financial Crimes Commission (EFCC) which wasn’t a good prospect at all.

According to the Qatar based media network, Al Jazeera, she was appointed commissioner for trade and investment by the Prime Minister of the Dominican Republic, Roosevelt Skerrit and was issued a diplomatic passport which makes her immune from any form of criminal prosecution. The media giant went further to say that the Ijaw born erstwhile minister may have bought a $2.2 million near the United Nations building in Manhattan, New York in the United States.

The immunity from prosecution is based on the Vienna Convention of 1961. This explains why she has been in the United Kingdom for four years and the EFCC have been unable to extradite her back home to face the criminal charges.

So far she has forfeited about $250 million worth of assets to the Federal Government.

Her critics contend that she is the victim of a vicious witch hunt by the Buhari government who will stop at nothing to paint his predecessor in bad light. The mind boggling question is how did she come about such huge assets? Where they an inheritance? Was it from her legitimate earnings while in Shell? If indeed she was innocent, why did she go on a self imposed exile to London? If the findings by Al Jazeera are true, why did she procure the diplomatic passport and how did she come about the funds to procure both it and the Manhattan property in question? These questions are seriously begging for urgent answers.

We recall the release of some pictures of her which suggested that she had cancer which were released by celebrity journalist, Dele Momodu in his ‘Boss’ blog. Why were those pictures released? Was she trying to curry public sympathy so that we would hurriedly ‘forgive’ her and tell her to sin no more?

Diezani deserves to be tried as the allegations against her are extremely weighty. Agreed, there is a law which is shielding her but even the laws can be changed when they are found to be bad or not in the interest of the public. Her alleged embezzlement of billions of dollars is no child’s play as the funds are meant for all Nigerians.

Once upon a time, slavery was a good law before it was abolished. The killing of blacks in conquered African territories during the colonial era was a good law before it was abrogated as having a similar status to murder or homicide. The killing of twins in the present day Igbo land and Cross Rivers as well as Akwaibom states was once legal before the efforts of Mary Slessor, the prominent Scottish missionary who helped put an end to it.

A law that shields alleged corrupt persons from being tried is certainly repugnant to equity, justice and good conscience and should be scrapped forthwith.

The British government must play a role in ensuring that Diezani is extradited back to Nigeria and made to face the music if found guilty.

Enough of this hypocrisy and legal mumbo jumbo!
Tony Ademiluyi writes from Lagos and edits www.africanbard.com