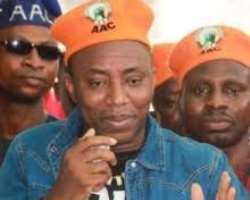 Presidential spokesperson, Mr Garba Shehu, on Saturday explained what led to a recent meeting with detained activist, Omoyele Sowore and some personalities.

An online medium, Premium Times, had named Special Adviser to the President on Media and Publicity, Mr Femi Adesina; Isa Funtua; ThisDay Publisher, Nduka Ogbaibena; and Shehu among a team that went to meet with Sowore at the Department of State Services headquarters in Abuja allegedly on behalf of President Muhammadu Buhari to negotiate his release.

The publication said it found out Buhari sent teams to Sowore to pressure him to give up his struggles in defiance to court orders asking the DSS to release him on bail.

Speaking on what led to the meeting, Shehu said the idea came from the media community to intercede for Sowore, being one of theirs.

The presidential spokesperson said the meeting took place about the time the convener of the #RevolutionNow protests was arrested in August, adding that Sowore had yet to be charged to court at the time.

Shehu stated that the meeting was neither arranged by Buhari nor held on his behalf by the persons who met with Sowore.

“Yes, the leadership of the media community asked to see Sowore and they were allowed to meet him.

“Their reasoning is that although he acted as a politician, the fact that he came from the media imposed a responsibility on them to intercede for him. It had nothing to do with President Buhari.”

On the date of the meeting and what was discussed, he said, “This was very early after his arrest. He hadn’t been charged as of that time.

“Sowore was pleased to receive us. All our leaders asked him to do was, operate within the law. He promised cooperation. He said that his lawyer needed to be talked to. And I am aware that his lawyer had been met.’’