As Commissioner For Women Affairs Raises Alarm on Rape, Sexual Assault, Gender Based Violence in Society
By Sadiq Abubakar, The Nigerian Voice, Maiduguri 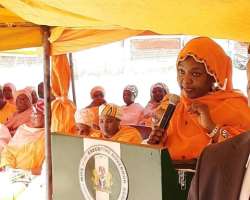 She also called on parents, women and girls to always report cases of rape and sexual abuse as well as any gender based violence to the nearest security agencies within their domain for proper and necessary legal action.

Dr. Falmata Zulum made the call during the distribution of the skills acquisition empowerment items facilitated by and organized by ministry of women affairs held Saturday at the Teachers' Village IDPs Camp along Pompimari Bye Pass opposite Trailer Park Maiduguri. She said, the purpose was to bring the safety and rights of women and girls to the core and protect the rights and safety of women and girls in the society as declared by the Belgium international convention , noting that," it is a Clarion call to end gender based violence and rape respectively by making the perpetrators of the impunity to face the wrath of the law". According to her, apart from the gender based violence, women and girls trafficking has become an order of the day and on the increase while 2% out of 40 cases of rape only report the matter for legal action , stressing that, "there is the urgent need for legal backing of the necessary law."

She also called on women and girls to no longer keep quiet or be silent due to culture or tradition or threats or corruption while calling on the leaders to bring to the core issues of gender based violence.

"I feel highly disturbed as a mother, how it affects the vulnerables in the society. In Borno state, our case is the worst and compounded by the Boko Haram insurgency. "I appeal to the parents, all women and girls to support the campaign on gender based violence against women and girls. This is the only way through which legal action can be taken against such acts by the lawmakers", Falmata said.

Earlier in her welcome address, the Honourable Commissioner, Borno State Ministry of Women Affairs and Social Development, Hajiya Zuwaira Gambo disclosed that 300 beneficiaries have been selected from the various IDPs Camps where 15 Women IDPs are going to be trained and empowered. She added that more women IDPs who are also vulnerable in IDPs Camps and host communities wiil also benefit from the programme as plans are underway by the ministry to extend the programme to all the nooks and crannies of the state with the support and approval the Governror.

The Commissioner thanked the Wife of the Governor for her untiring support and cooperation with the ministry in it's efforts to reach out to the less priviledged and the vulnerables including those with disabilities. She noted that all the beneficiaries will be going home with their training tools and kits to empower the trainers, engage them in self reliant jobs and subscequently become employers of labour.

Hajiya Zuwaira said the gesture will go a long way in enhancing their capacity and improve their livelihoods thereby making them more resilient as people directly aftected by the insurgency.

She also lamented on situations that women and girls are exposed to in the society, saying, “through speaking out, sexual assault victims risked breaking the silence around sexual assault and in this way gained a voice and the beginning of a change in society’s attitude.” "The silence of the victim of rape does not translate to her consent as erroneously argued in some quarters. In her silence, she suffers degree of indignity that cannot be graphically captured in words. The stigma goes before her if her story is known to her immediate environment and of course, the psychological trauma beclouds her sense of reasoning.

"Sexual assault encompasses a range of acts, including coerced sex in marriage and dating relationships, rape by strangers, organized rape in war, sexual harassment (including demands of sex for jobs or school grades), and rape of children, trafficking of women and girls and forced exposure to pornography," Zuwaira said. She added that regardless of age, the impact of sexual violence goes beyond any physical injuries. The attendant trauma and shock are also devastating. The problem becomes even more compounded by the prevailing trend of failure to report rape due to attendant stigma which only leads to continued sexual assault.

The Permanent Secretary of the ministry, Dr. Hauwa Mai Musa thanked the First Lady for her facilitation of the empowerment programme and assured that the ministry intends to extend the programme to other IDPs in Camps and host communities. The Director, Women Affairs of the ministry, Hajiya Falmata Gambo said the items distributed were of three categories based on skills acquisition which include tailoring, cap making and liquid soap making.

For the Tailoring, 100 beneficiaries selected from different IDPs Camps were each given butterfly sewing machine, a tiger generator set and accessories like scissors, threads, niddles, tapes and tins of lubricating oil. Those in cap making category were also 100 beneficiaries drawn from.all the IDPs Camps and each of them was given 5 caps, threads, 2 packets of knitting threads, dignity kits and I packet of niddle. The third category, which is the Liquid soap making, each of the 100 beneficiaries went home with chemicals, perfumes, deocorants, hand gloves, plastic bowls and dignity kits. One of the beneficiaries, Kaltume Musa Monguno thanked the Govenros wife for her gesture and prayed for both Governror Zulum and his wife's good leadership, protection and guidance. Another beneficiary, Fatima Adam appreciated the support of the governor and his wife and thanked the commissioner and staff of the ministry for their efforts.

Highlights of the event was symbolic distrubution of the skills acquisition items and inspection of exhibitions stand of items produced by the IDPs.