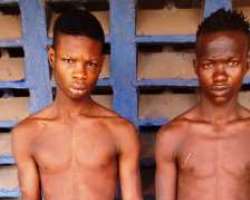 Two suspected highway armed robbers have been arrested by men of Ogun State Police Command at the long bridge along Lagos/Ibadan expressway.

The suspects, Sunday Okechukwu and Salam Faruk were arrested at about 9:30pm by policemen on joint patrol operation co-ordinated by the Area Commander of Owode-Egba ACP Irimiya Asimiya.

The Police Public Relations Officer for the command DSP Abimbola Oyeyemi told The Nigerian Voice that the suspects were arrested while robbing motorists who got stuck in the traffic gridlock as a result of the ongoing road construction.

He said the policemen who were on foot patrol of the area sighted the two suspects armed with dagger knife with which they were forcing commuters to surrender their properties.

The PPRO said the suspects were chased and arrested before they could jump under the bridge.

He added that during interrogation, the suspects confessed to have come from Lagos to the long bridge for the purpose of robbing motorists held on gridlocks.

The Commissioner of Police in the state, CP Kenneth Ebrimson ordered the immediate transfer of the suspects to Special Anti-robbery Squad (SARS) for discreet investigation.

The CP also ordered 24-hour surveillance patrol on all the highways across the state so as to checkmate the activities of hoodlums who might want to be disturbing the innocent commuters on the highways.