Noise Pollution in the name of Religion 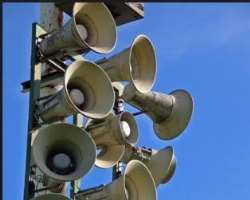 Religion from time immemorial has been both a blessing and curse to mankind. The positive side of it is that it helps regulate the behaviour of man. Man by nature is mean if left to his own devices. The Holy Bible says that the heart of man is desperately wicked. Religion with its teachings of life after death, punishment here on earth and in the life to come, the judgement of God who is adjudged as the creator of the universe to which all mortals must give an account of how they spent their lives helps to checkmate the excesses of man as the Thomas Hobbesian state of nature would be the lot of man. On the flip negative side, it has been the cause of wars – we recall the Holy Crusades between the West and the Middle East in the thirteenth century. Even the Jihad or Holy War which brought the Sokoto Caliphate into existence was fuelled by religious considerations. It also leads to fanaticism as some members of some sects can do all manner of asinine things for their leaders. Some can die for their leaders and some can sacrifice their careers and other things that they hold dear to please their leaders. Religion is a two edged sword and should be approached like the toss of a coin which has the head and tail.

The absence of a master plan in most states in Nigeria especially Lagos State has seen churches and mosques been built in residential areas. These religious houses have loud speakers and in most cases non sound proof doors and windows. The noise that emanates from there in most cases is enough to wake up the dead to put it sarcastically. The religious leaders do not care about the well being of the residents around their church. They carry on with an ‘I don’t care attitude’ because they know nothing will happen to them. Who dares sue a ‘Man of God?’ Doesn’t the same Bible say ‘Touch not my anointed and do my Prophet no harm?’

Another menace is the practice of some itinerant preachers who preach on the streets in the early hours of the morning. In most cases, you don’t need an alarm clock to wake you up as these self appointed missionaries scream on top of their voices and in some cases with a microphone to preach the Gospel of ‘Salvation.’ They don’t care about the well being of the residents of the areas that the preached in. They sometimes share tracts indiscriminately not caring to first find out the religious inclination of the proposed beneficiaries of it.

Another set are those who preach in commercial buses and taxis. They just board the vehicles and start screaming at the top of their voices. Not even the bus driver or conductor can stop them as sometimes they even join in the prayers. I vividly recall my experience with one when I boarded a commercial vehicle that was travelling outside Lagos state. After he preached the ‘Gospel’ he then passed a big bag around asking for freewill donations to move his ministry forward. I chuckled beneath my breath when I heard him quote the Biblical message that ‘A labourer deserves his wages.’

When the current Governor of Kaduna State, Mallam Nasir El-Rufai proposed to regulate street preaching in that state, his critics screamed blue murder and called him a religious bigot amongst all manner of derogatory names. He was only trying to bring sanity into the state so that the religious rights of others and their right to peaceful coexistence free from the encumbrance of noise can be respected.

Agreed, Islam and Christianity are the two dominant religions but there are also several others even though they operate marginally. There are also atheists and non religious people whose rights to peaceful coexistence must also be respected.

I commend the recent initiative by the Lagos State Government to register all churches and mosques within the state. However, it shouldn’t stop there. There should be a law with regards to how these religious institutions are built. They should be built as far away as possible from residential buildings and heavy sanctions should be given to defaulters.

Street preaching should also be abolished as it greatly infringes on the rights of people of different faiths. There should also be a sturdy law banning the preaching of religion in commercial vehicles as it disturbs the peace of some people who want a quiet time and also the fact that there are people of other diverse beliefs whose rights must be protected.

There is the need to stop religious conflicts and this can only happen if the rights of people of other faiths are safeguarded. We also need to go the extra mile to understand different religions as that way we will all be able to live in peace and harmony.

The governments must show zero tolerance for religious bigots who don’t care about the rights of others in their ‘zeal’ to impose their beliefs on others.