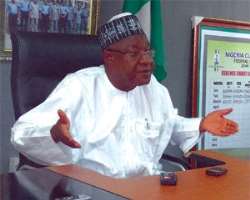 The Centre for Anti-Corruption and Open Leadership (CACOL) has condemned the order of a Federal High Court in Abuja barring the Economic and Financial Crimes Commission (EFCC) from prosecuting a former Comptroller-General of the Nigeria Customs Service (NCS), Dikko Inde Abdullahi.

CACOL stated that the order by Justice Nnamdi Dimgba given on the non-prosecution agreement entered into between the Attorney-General of the Federation, Abubakar Malami, and the ex-Customs boss, showed that the government does not speak with one voice.

CACOL’s Coordinator of Media and Publications, Adegboyega Otunuga, said in a statement on Tuesday that the plea bargain Dikko entered into with the AGF was not in concordance with the anti-corruption agency.

“The very act of objection by the EFCC leadership greatly suggests that what the former Customs boss surrendered was insignificant compared to the humongous and unimaginable resources he frittered away.

“The normal thing would have been for the office of the Attorney-General to liaise very critically with the anti-graft agency to acquaint itself with all grey areas of the former’s investigation and findings towards arriving at a suitable and most patriotic synergy so as not to allow the nation to be shortchanged by corruption using such folly.

“This unfortunate scenario is probably why many critical stakeholders within the nation’s financial circle and anti-corruption assignments have called for certain prosecutorial and administrative powers on corruption to be taken away from the Office of the AGF. We could not agree more with that proposition. This is because such loopholes or let-off is tantamount to a slap on the wrist for corruption culprits,” CACOL said.

CACOL noted that plea bargain should not be used as an avenue for financial criminals and corrupt elements to escape justice; especially when such elements could still claim innocence in future and craftily find themselves back in positions of power.