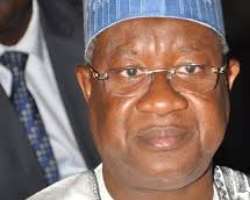 The Attorney-General and Justice Minister, Abubakar Malami has blocked the trial of a former Comptroller-General of Customs (CGC), Abdullahi Inde Dikko, for alleged corruption telling Justice Nnamdi Dimgba of the Federal High Court in Abuja Monday to dismiss the suit filed by the Economic and Financial Crimes Commission (EFCC) because a binding deal to refund monies to state had been executed between the retired customs boss and the federal government

The Attorney-General said the Department of State Services (DSS) Director-General witnessed the agreement.

According to him, Dikko was required to refund $8million or its naira equivalent at an exchange rate of N197 to a dollar, which the Customs under him allegedly did not remit to the government.

Justice Dimgba held that the agreement exists and Dikko kept his side of the deal by returning over N1, 576,000,000 to the Federal Government.

He said the money was paid through the EFCC’s funds recovery account with the Central Bank of Nigeria (CBN).

Therefore, it is wrong for the EFCC or any other agency to prosecute Dikko on the same alleged offence, the judge ruled.

The judge noted that the first and second defendants in the suit filed last year – the AGF and DSS Director-General – did not oppose the suit, implying that they agreed with Dikko’s claim.

Justice Dimgba held that a petition by a faceless author “cannot override the discretionary powers conferred on the Attorney-General of the Federation under section 174 of the Constitution.