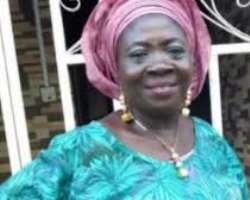 Barely 24 hours after President Muhammadu Buhari ordered the police to arrest the killer of the Women Leader of the Peoples Democratic Party (PDP) at Ochadamu, Ofu Local Government Area (LGA) of Kogi State, Mrs. Salome Abu, the state Police Command has announced the arrest of six suspects in connection with the murder.

Abu was killed by thugs suspected to belong to All Progressives Congress (APC) on November 18, two days after the governorship election, which the party won.

The spokesman for the command, Mr. William Aya, a Deputy Superintendent of Police (DSP), told NAN in Lokoja that the suspects were brought in on Friday.

Abu, a former councillor, was set ablaze in her husband’s house at Ochadamu, by hoodlums.

Aya said the police had started interrogating the suspects to ascertain their level of culpability adding that the outcome of the investigation would be made public as soon as it was completed.

Buhari had on Sunday demanded a thorough investigation of the murder of the woman leader.

He said the killers must be brought to justice irrespective of whatever allegiances they held.

Buhari had expressed outrage at the murder, while also decrying whatever reason could spur anyone to take the life of another human being, particularly a woman.

In a statement issued by one of his media aides, Mr. Femi Adesina, the president charged all security agencies involved in the investigation to do a thorough and expeditious job on the matter, so that justice could be served without fear or favour.

“We must learn to behave decently, whether during elections or at other times. No life should be taken wantonly under any guise, and the fact that this reprehensible act occurred two days after voting shows primitive behaviour, which should not be accepted in a decent society,” the president had said.

He also sympathised with the family of the deceased and vowed that the law would catch up with the malefactors, while assuring Nigerians that justice would be done.

According to Buhari, the treatment visited on the PDP leader was pure criminality and bestiality and a descent to barbarism that has gone out of the realm of politics.