Prof. Maurice Iwu's Fraud Case Stalled Because Of The Absence Of The Trial Judge 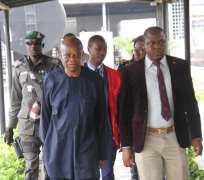 The N1.2 billion fraud trial of Prof. Maurice Iwu, a former Chairman of the Independent National Electoral Commission (INEC), was on Monday stalled following the absence of Justice Nicholas Oweibo of the Federal High Court, Lagos.

The News Agency of Nigeria (NAN) reports that Iwu is facing a three-count charge of fraud and money laundering brought against him by the Economic and Financial Crimes Commission (EFCC).

He was first arraigned on Aug. 8 before Justice Chuka Obiozor, also of the Federal High Court in Lagos, who granted him bail in the sum of N1 billion.

Oweibo adjourned until Monday (Nov. 29) for the commencement of trial.

Due to the absence of the judge on Monday, the case was again adjourned until Feb. 27, 2020.

According to Mr Rotimi Oyedepo, lead counsel to EFCC, Iwu committed the alleged offences from December 2014 to March 27, 2015.

“The defendant aided the concealment of N1.23 billion in the account of Bioresources Institute of Nigeria Ltd. with number 1018603119, domiciled in the United Bank for Africa.

“He ought to have reasonably known that the N1.23 billion formed part of the proceeds of fraud,” Oyedepo said.