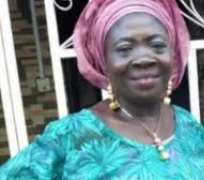 The Prominent Civil Rights Advocacy group- HUMAN RIGHTS WRITERS ASSOCIATION OF NIGERIA (HURIWA) has tasked President Muhammadu Buhari to ensure that the armed thugs belonging to his political family the All Progressives Congress (APC) who burnt to death in her house the Women Leader of People's Democratic party (PDP) in Kogi state -Mrs. Acheju Abuh are arrested, prosecuted and punished or his government would be dragged before the Internatioal Criminal Court in The Hague Netherlands.

HURIWA carpeted President Muhammadu Buhari; the First Lady Mrs Aisha Buhari; Women Affairs Minister Mrs. Pauline Tallen and the leadership of the National Council for Women Societies and Women Rights campaigners for their collective silence on this atrocious burning of a Woman to a gruesome death by armed thugs of the ruling political party only because of her political beliefs and for her support for the governorship candidate of the People's Democratic party (PDP).

"HURIWA is shocked and saddened that For over a week since after this satanical atrocity happened of setting ablaze a Woman by armed political thugs who have till now not been arrested and the leadership of Women in Nigeria led by the wife of the president has said nothing nor has the ministry of Women Affairs or the National Council of Women Societies added their voices in condemnation of this evil act. The silence is painful and for the fact that Mr. President went about celebrating the pyrrhic victory of his candidate Yahaya Bello in the Kogi election and could not even order for the observation of some minutes of silence to honour the memory of the PDP women leader killed by armed thugs of APC in Kogi shows the devaluation of the sanctity of human life under the current dispensation. The act of burning this woman to a painful and undeserving animalistic death is such that if the killers are not arrested and punished within a record time then civil Rights bodies can file a petition before the International Criminal court in The Hague Netherlands to possibly try the Kogi state governor for alleged crimes against humanity even as the Inspector General of Police Mohammed Adamu may be included in the list of the accused persons since the Nigerian police force managed the security during the Kogi governorship poll during which this lady was set alight and killed willfully. The President Muhammadu Buhari who thinks since he is in his last tenure he can afford to be reckless could even be named as an interested party because as the commander-in-chief of the Armed forces of Nigeria this sort of atrocity happened and his administration failed in their obligation to prevent the violations of human rights including the violation of the Rights to life of the PDP's Women Leader killed in Kogi State.By becoming parties to international treaties, States including Nigeria, assume obligations and duties under international law to respect, protect and fulfil human rights for all persons within their territory or jurisdiction, without discrimination of any kind.Further, “States, including all branches thereof, have the primary responsibility for the promotion and protection of all human rights, including the prevention of human rights violations. Under these universal obligations, the Nigerian government ought to have put mechanisms in place to prevent the burning to death of the Women Leader of People's Democratic party in Kogi state and worst still, the Nigerian Police Force had over 60,000 armed police operatives in Kogi state during the governorship election but these armed security forces refused to prevent the atrocious burning to death of the opposition politician who was a Women Leader of People's Democratic party ".

Citing documents of the International Human Rights Council, HURIWA affirmed that: "The obligations of States include the duty to protect against human rights abuse by third parties, including private actors. States may breach their international human rights law obligations where they fail to take appropriate steps to prevent, investigate, punish and redress private actors’ abuse like in the case of the Women Leader of People's Democratic party in Kogi state burnt to death by violent fanatics of All Progressives Congress. ​The obligation to prevent human rights violations is expressly formulated in some treaties and has been addressed more broadly in human rights treaty bodies’ General Comments and reports, notably in relation to: the prevention of torture, genocide, mass atrocities, incitement to hatred, violent extremism, and the elimination of discrimination on particular grounds (such as race,religion or belief or sexual orientation(A/HRC/29/23)) or with regard to a particular group (such as women, persons with disabilitiesand minorities (A/HRC/28/30, paras. 13–14); A/69/66).. Nigeria is a signatory to all these treaties."

HURIWA stated that the killing of the PDP'S Women leader took place because the Nigerian State failed in its obligation to prevent such callous and heartless act of violence on an innocent citizen just as the Rights group reminded the Federal government that the consideration of prevention of violation of these specific rights highlights some common features and approaches to prevention, including the identification of risk and mitigating factors, and the development of some practical tools.

"For example, the prevention of genocide, war crimes, ethnic cleansing and crimes against humanity requires “sustained efforts to build the resilience of societies to atrocity crimes by ensuring that the rule of law is respected and that all human rights are protected, without discrimination. Sadly, the sanctity of human life has over time under the current dispensation in Nigeria suffered grave violations with many citizens getting killed by armed non state actors and many others are extra legally executed by state sponsored security forces and not a single indicted person is prosecuted just like in the instant case of the Women Leader of People's Democratic party in Kogi state".

HURIWA said what happened was a hate crime and pure act of criminal murder because her killing was related to her political beliefs just as she was also the Women Leader for the campaign organisation of the Peoples Democratic Party governorship candidate, Musa Wada, in the just-concluded governorship election in the state.