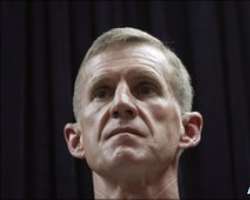 The top US commander in Afghanistan has been summoned to Washington, ABC News reports, in the wake of a magazine article that mocked senior Obama administration officials and diplomats.

Gen Stanley McChrystal has apologised for the article in Rolling Stone.

In the article, Gen McChrystal said he felt betrayed by US ambassador to Kabul Karl Eikenberry.

Meanwhile a US congressional report said the US military had been giving tens of millions of dollars to Afghan security firms who were channelling the money to warlords.

'Clown'
The Rolling Stone article – The Runaway General – is due out on Friday, but Gen McChrystal quickly sought to limit the damage.

He said in a statement on Tuesday: “I extend my sincerest apology for this profile.

“It was a mistake reflecting poor judgement and should never have happened.”

He adds: “Throughout my career, I have lived by the principles of personal honour and professional integrity. What is reflected in this article falls far short of that standard.

“I have enormous respect and admiration for President Obama and his national security team and for the civilian leaders and troops fighting this war and I remain committed to ensuring its successful outcome.”

Nato spokesman James Appathurai said on Tuesday that the article was “unfortunate”, but that the organisation's Secretary General Anders Fogh Rasmussen had “full confidence in General McChrystal as the Nato commander and in his strategy”.

The BBC's Quentin Sommerville in northern Afghanistan says the article highlights the long-suspected divisions between the US military and administration officials.

One of the main targets of the article appears to be Mr Eikenberry.

Gen McChrystal says he felt “betrayed” by the ambassador during the White House debate on troop requests for Afghanistan.

Gen McChrystal appears to joke with his aides about US officials

Gen McChrystal suggests Mr Eikenberry was using a leaked internal memo that questioned the troop requests as a way to protect himself from future criticism over the deployment.

The general says: “I like Karl, I've known him for years, but they'd never said anything like that to us before.

“Here's one that covers his flank for the history books. Now if we fail, they can say, 'I told you so'.”

Gen McChrystal also appears to joke in response to a question about the vice-president.

“Are you asking about Vice-President Biden?” McChrystal asks. 'Who's that?”

An aide then says: “Biden? Did you say: Bite Me?”
Another aide refers to a key Oval Office meeting with the president a year ago.

The aide says it was “a 10-minute photo op”, adding: “Obama clearly didn't know anything about him, who he was… he didn't seem very engaged. The boss was pretty disappointed.”

Gen McChrystal himself says: “I found that time painful. I was selling an unsellable position.”

Another aide refers to national security adviser, James Jones, as a “clown stuck in 1985″.

Of an e-mail from US special envoy to Pakistan and Afghanistan Richard Holbrooke, Gen McChrystal says: “Oh, not another e-mail from Holbrooke… I don't even want to open it.”

Last year's Afghan strategy review by the new president was detailed and drawn out, with Gen McChrystal finally getting an additional 30,000 US troops from Mr Obama.

The Rolling Stone article reflects the fraught nature of the diplomatic process in Afghanistan.

On Monday, it was reported that the UK's most senior diplomat in Afghanistan, special envoy Sir Sherard Cowper-Coles, was taking extended leave amid reports of clashes with senior Nato and US officials.

The convoys are attacked if payments are not made, it is alleged.