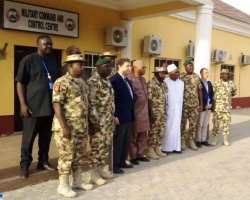 The United Nations (UN) and European Union (EU) have reaffirmed their support and determination to continue to partner and work with the Nigerian Military to end Boko Haram insurgency in Borno state, Northeast and the Lake Chad Basin region.

The Leader of the Joint UN, EU representatives, Dr. Mohammed Ibn Chambers reassured that they visited the Theater Commander, Operation Lafiya Dole, Major General Olusegun Adeniyi and principal officers at the headquarters of the command in Maiduguri to show solidarity and express confidence in what the Nigerian armed forces have been doing in Africa and other parts of the world fighting terrorism and insurgency which is in line with the conference of security ministers of UN countires. He said ,"in persusance of the United Nations Security Council resolution 2349 of 2017 which charged my colleagues and I to bring partnrrship with international agencies to mobilize support to the Lake Chad Basin countries to defeat Boko Haram insurgents in whatever way.

"Our visit here underscore the support for Nigeria Army in its efforts to end Boko Harsm insurgency. The UN from inception of the insurgency have been supporting the Multi National Joint Task Force in combating Boko Haram and criminal elements in sahel and Lake Chad region" Chambas said.

He also said" we should pull resources together to fight insurgency. We commend you for what you have been doing. Your success, is our success because it is only when you clear an area that humanitarian workers can access. So we are here to support the government of Nigeria and the people of Borno.

"We are here to support you and show our strong solidarity and commitment to bring peace back to the region. We will give you the support you need to end this war," Chambas said.

In his address the UN Special Representative of the Secretary General for Central Africa Ambassador, Francio Fal said " the protracted Boko Haram insurgency must be defeated. We have to mobilize all our support to end this insurgency.."

" We are commending all what you have been doing to end this war. We are strongly behind you, together we will restore peace back sahel and Lake chad region ", Fall said.

Also speaking, the Europisn Union Special Representative for Sahel and Lake Chad region, Ambassador Antel Ludsada said " our visit is to bring you our solidarity and strong political commitment to support the Nigerian military to end insurgency in the region and Africa in general. ".

" The EU has been supporting your efforts. From very beginning with 61 vehicles, five ambulances, lubrication materials among others.. I assure you of EU continued commitment to end Boko Haram.", Ludsada said

Responding , the Theater Commander Operation Lafiya Dole, Major General Olusegun Adeniyi said " your visit is a morale booster to our troops. This visit shows that the International community are with us. I will send pictures of your visit to our troops down there in the trenches".

He said the cost of the special envoys will.boist the morale if the officers and soldiers at the theater ic Operation, stressing that, their visit will definitely be communicated to the troops at the trenches while assuring you of the finishing of the war with the full support of the UN and EU having realized the role and gallantry of the Nigerian armed forces

General Adeniyi further urged them to convey to the UN and EU Secretary Generals that the Nigerian military are willing and determined to end the war but need their continuous support and encouragement while thanking them for the visit.

"They are already suffering defeat . The Operation Lafiya Dole is carrying out this war inline with international law of armed conflict ", Adeniyi said