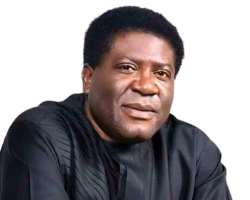 The immediate past Deputy Governor of Imo State, Prince Eze Madumere, congratulates David Lyon of Bayelsa State over his resounding victory at the November 16, 2019 governorship poll.

Prince Madumere described Lyon’s victory as well deserving and a reflection of the will of the people of Bayelsa.

He however hailed the people of Bayelsa for embracing the All Progressives Congress Next Level Agenda, which borders on well-thought-out policies and programmes to engender true development in the polity.

He also hails the re-election of Yahaya Bello, observing that Bello’s resolve to right the wrongs and the people’s belief that their welfare will be paramount in the new dispensation remain the main factor that brought about the resounding victory.

He also singled out the effort of the wife of President, Aisha Buhari and her team, APC Governors among others for their roles in ensuring that the vision of the Party is sustained.

The former Deputy Governor condemns the theatre of violence that played out during the two elections, praying that politicians should come unto true repentance, where elections should be seen as a means to contribute towards the improvement of the lives of the people and not war.

He hailed the courage of the electorates who still came out enmass to cast their votes for their preferred candidates even in the face of isolated cases of violence.

According to Madumere, “while condoling the families that were affected by the flashes of reported violence, he urged the incoming governments to ensure that the affected families are reached out to so as to ameliorate the pains of extreme effects of violence, while calling for a national discourse on the best way to curb the growing tradition of electoral violence.”

He also called on the two governors to be magnanimous in victory by ensuring that they reach out to opposition candidates and other stakeholders so as to ensure a holistic stance in their bid to improve the living standards of their people.

He further urged politicians who feel otherwise with the outcome of the election not to take laws into their hands but should seek justice from the court of competent jurisdiction.