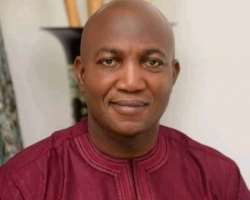 In 1996, the then military led government headed by General Sani Abacha created an extra six states which made the country have thirty-six states in all. Bayelsa was one of those six states and it was created out of the old Rivers state. The state is one of the few states to have a homogeneous population as the tribe there are the Ijaws.

Despite its abundant natural resources which consist mainly of crude oil, the state has been receiving the short end of the stick since 1999 when democracy returned to the country no thanks to evil, corrupt and visionless leadership.

In 1999, former Airforce Officer, Chief Dipreye Solomon Peter Alameyeisegha became the first civilian governor of the state. His tenure was cut short in 2005 when the Bayelsa State House of Assembly impeached him for alleged corruption and abuse of office. We vividly recall that he went to Germany for a tummy tuck operation which went awry and he disguised as a woman to beat the ‘mighty’ London metropolitan charges so as to avoid being a guest of her Majesty for alleged money laundering. There is no visible legacy that Alameyeisegha left behind. He was among those who battled the Federal Government for the thirteen percent derivation but what did he really do with it? Most roads are bad, clean water remains a mirage, no international oil company apart from Agip operates there, crime was on the upsurge with oil spillage damaging the farms and rivers.

Former President Goodluck Jonathan took over as governor in 2005 before being elected as Vice-President in 2007. He only spent two years in office but not much was really achieved by him. Timipre Sylva took over in 2008 and the vicious cycle of a visionless leadership took the centre stage. After he lost out to the current incumbent, Seriake Dickson in 2012, he had a running battle with the Economic and Financial Crimes Commission (EFCC). The agency went on to seize 48 allegedly illegally acquired properties with his ‘sins’ being forgiven when he joined the now ruling APC when there was a full restoration of the seized choice assets.

What really happened on Saturday which in a twist of a déjà vu is the 115thposthumous birthday of the Late Zik of Africa? Why did Bayelsans suddenly ditch the PDP for the APC which seems to appeal largely to Northern interests? What happened to the power of incumbency which Dickson boasted of? Why did most Bayelsans troop out en masse to send the party that held sway for twenty years in their state for a sudden and strange alliance with the APC which doesn’t connect or strike a chord with the average Bayelsan?

The Seriake Dickson led administration was a gargantuan failure. No infrastructure was built, the roads were worse than death traps, the educational sector was in comatose, the state civil servants were being owed salary arrears stretching into months despite the huge oil revenues and the bail out fund which she received from the centre. There was nothing to justify the agitations by Dickson for an increase in the revenue sharing formula as tongues wagged as to what he did with the ‘miniscule’ thirteen percent that he received for eight solid years. He also had the distinction of being the first governor to get a second term in office but with nothing to show for it. He then embarked on the white elephant project of building an airport. Was there really any need for it as the Port Harcourt which attracts far more traffic than the state can ever attract in ten years is nearby? How many people really go to Bayelsa? Dickson failed to create the enabling environment for local and foreign investors to come in to massively develop the state despite the enormous resources at his disposal. The people saw the election of Senator Doauye Diri as a continuation of the ill fated Dickson administration and so they turned their backs on the PDP by casting their vote for Sai Baba’s party.

The APC Gubernatorial Candidate, Mr. David Lyon was not only a grassroots mobilize, he was equally a great philanthropist of note. His connection to the people through developmental projects didn’t start today, it commenced many years ago. This endeared him to the masses who decided to vote for the individual rather than the party. Hunger, one of the worst things to afflict mankind knows no ‘rational thinking’ and they thought it expedient to dump the PDP like a bad habit.

The APC exploited the infighting in the PDP to coast home to victory. Serial gubernatorial contestant and ex MD of the Niger Delta Development Commission (NDDC), Timi Alaibe was allegedly the anointed son of former President Goodluck Ebele Jonathan. After his loss in the party primaries to Diri, he and his supporters distanced themselves from the campaign activities. Even the most influential PDP Governor Ezebunwo Nyesom Wike failed to come for the PDP rallies that held across the state. In a curious twist, some APC members visited Jonathan’s mum in her home a few days to the elections and many meanings were read to it. Did Jonathan like the Biblical Nicodemus silently back the APC in the dead of the night? History always repeats itself because man learns the stories but never the lessons. We recall a similar thing that happened in Lagos in the heady days of the third republic. Sir Michael Otedola of the National Republican Convention (NRC) defeated Yomi Edu of the Social Democratic Party (SDP) because of the conflict in the SDP between Late Professor Femi Agbalajobi and Dapo Sarumi. Despite the fact that SDP boasted of twenty-six members out of the thirty member house of assembly seats, they still lost to the NRC.

The first name of the new Bayelsa Governor-elect is David. We hope he will be able to slay further Goliaths in the battle to put the impoverished state – one of the poorest in the nation on the bumpy road to unprecedented prosperity.

Will he call the bluff of the parasitic godfathers or will he succumb to the lure of public office and forget his social contract with the hapless people?