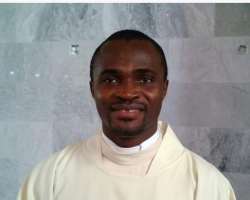 The Enugu State Police Command confirmed the release of the Catholic priest.

Fr. Ndulue, Parish priest of St. Patrick’s Catholic Church, Ihuonyia in Amansiod, Ndiagu Oghe in Ezeagu Local Government Area of the State was kidnapped while he was returning home from a Pastoral Council meeting along Amansiodo road on Friday.

But the state Police Public Relations Officer, Ebere Amaraizu told our correspondent that he was released on Sunday.