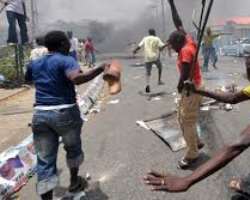 Media reports earlier was that two persons were killed by stray bullets at the Adankolo polling unit in Lokoja when voters resisted thugs who had come to snatch ballot boxes. It was also reported that two others, identified as Umoru Shuaib and Farou Sulieman, were feared dead in Abocho community in the Dekina area.

The PDP candidate in senatorial election rerun in Kogi West, Dino Melaye, said on Sunday that his nephew, who was shot when thugs invaded Ayetoro ward 01, unit 004 where Dino voted, had died.

In addition, the Kogi State Resident Electoral Commissioner, Prof. James Apam, said on Sunday that an unnamed ad hoc Electoral Officer died in a boat accident in the Ibaji council area of the state during the election.

He stated that the deceased was a student of the Kogi State Polytechnic, Lokoja.

The collation officer for the Mopa-Moro LGA, Issa Nurudeen, who is the Head of Department of Economics, University of Abuja, said there was cancellation of election in Okeayi-Ilayi and Ayedodo because of ballot box snatching. He said there were 915 registered voters in the two units that elections were cancelled. Punch