2019: Violence, Ballot Snatching And Rigging In Kogi, Bayelsa, A Betrayal Of Democracy. - ADP 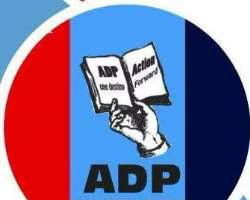 The Action Democratic Party (ADP), has said that the violence, ballot box snatching and rigging recorded in large scale, from various reports in Kogi and Bayelsa State, is a total betrayal of the country's hard earned democracy.

The party expressed huge disappointment in the conduct of the elections, based on various reports, and video documents available in the public domain, where gun shots and ballot box snatching was the order of the day, exposing electorates, Media crew and local and international observers to high degree of danger.

The party in a statement issued by the National Publicity Secretary of the party, Prince Adelaja Adeoye in Abuja on Sunday, he noted that this is one of the worst election in the history, where INEC staff would be kidnapped and returned without any consequence or anyone providing the country with useful explanations.

Democracy can only be enthroned, when electorates are allowed to exercise their franchise freely, without imposing candidates on them with force, coercing them with fear or by luring them with inducement, ADP told INEC.

Citizens, should not allow shenanigans to stand as the symbol of our electoral identity. The reports from YIAGA Africa and Democracy Watch Nigeria indicated that, the election was not free and fair both in Kogi and Bayelsa. YIAGA called for the outright cancellation of the Kogi election because of the high level of violence, ballot snatching and over inflation of results recorded.

In a situation like this, we expect that the President of the Nation should speak to Nigerians home and abroad, to douse tension, and assure the people of hope because, what played out in the affected states are clear case of betrayal of democracy.

The 8th Senate commenced the amendment of the electoral act. The act, takes care of a lot of electoral malpractices, which will reduce the rate of violence, ballox snatching, vote buying, electronic voting, rate of card reader downtime, irregularities in the use of incident forms and other vices that exposes our democracy to threat, but the President could not sign due to time factor at that time, we are urging the President to pick it up again and sign it ahead of the future elections, as a sign that he is ready to leave a long lasting legacy in our democracy.

Democratic system cannot grow, when those in the oppositions cannot have the opportunity to field candidates, contest, and win due to the clamp down by the instruments of the State.

The Independent National Electoral Commission (INEC), must restore confidence in the people of Nigeria, that they are impartial in the conduct of the election, because, all the required resources was provided, and thousands of securities were also provided. INEC is accountable to Nigerians, they should look at the reports of the independent observers and do justice accordingly.