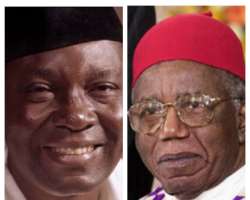 Nigeria, the most populous nation on the African continent with about two hundred million people is immensely blessed with rich human and natural resources. Virtually all endeavours of life have a bold imprint of a Nigeria proudly stamped on it.

The tragedy of the Nigerian genius is sadly in the fact that the most brilliant and altruistic minds are kept away from assuming the reins of political leadership. It has been so right from the time of independence when the Union Jack was lowered till date. The curse of the Nigerian genius aptly describes this melodramatic tragic-comedy where clowns and court jesters as well as third rate minds are allowed to be in charge with the geniuses kowtowing towards them in an endless scramble for the crumbs.

Despite the gloom when it comes to the thorny issue of leadership, a few names still stand out and they are worth clinking the glasses for.

Dr.Nnamdi Azikiwe a.k.a Zik of Africa was born on this day 115 years ago. He spoke the three major Nigerian languages fluently as he grew up in the present day North, South-West and South-East.

After reading a book written by Dr. Aggrey, a Ghanaian educationist in 1921, he was highly inspired by it and the fire of obtaining the then highly prized Golden Fleece burned like coals in him. In 1924,he attempted to stow away to the United States of America but he ended up in the then Gold Coast now Ghana where he joined the local police force.

Word got to his parents as to his whereabouts and his mom travelled all the way from Onitsha to Accra to inform him of the good news that his civil servant father had finally raised the funds he needed to make his educational dream in the US a reality.

He sojourned to Uncle Sam in 1925 and spent nine hard years there. Out of frustration in 1929, he nearly took his own life as he laid close to the railway tracks waiting for a fast moving train to crush his body to death. The Great Depression occurred that year and he was out of job for a long time. He was pulled out of the tracks by a good Samaritan and he went on to earn his Bachelor of Arts Degree in Political Science from Lincoln University making him the first Igbo University graduate. He later earned an M.A from the Ivy League University of Pennsylvania and a certificate in journalism from the prestigious Columbia University in New York. His attempt to do his doctorate in Columbia was truncated by the lack of funds.

He came back to Nigeria triumphantly in 1934 and soon berthed in the Gold Coast to edit the African Morning Post. The article ‘Has Africa a God’ nearly sent him to gaol on a sedition charge. His writing skills and business acumen made him grow the paper exponentially. He inspired Kwame Nkrumah to go to the US to study after the latter paid him a visit.

He came back to Lagos in 1937 and set up the Zik Group of Newspapers with the West African Pilot being the flagship which he used for nationalistic and political purposes. His media empire came to an end in 1967 following the outbreak of the civil war.

As a nationalist, he was based in Lagos when he returned home from Ghana despite pleas from his father that he should be domiciled in Onitsha. He nearly became the Premier of the Western Region in 1954 but was betrayed by some of his NCNC party members who played the tribal card against him.

He returned to the East and became its Premier in 1954 and did his best to rapidly develop the region on the basis of its oil palm proceeds which was the mainstay of its economy.

As a nationalist, he was opposed to a secession clause which the then Action Group led by Chief Obafemi Awolowo wanted to insert in the 1960 independence constitution. He publicly denounced it and ensured that it was defeated in the Federal House of Representatives.

In 1960, he became the nation’s first Governor-General with largely ceremonial powers. This was the tragedy of the independence struggle as the nation’s foremost nationalist couldn’t transit into becoming its political leader. He may have taken solace in Mahatma Ghandi’s decision to quit partisan politics when India obtained its independence from the UK in 1947.

He sacrificed for the oneness of Nigeria during the civil war defecting to the Nigerian side in 1969. He tried unsuccessfully to govern the nation in 1979 and 1983 but wasn’t successful. After the fall of the Second Republic, he became an elder statesman and commentator on burning national issues. I am glad that many monuments were named after him – the International Airport in Abuja, his picture on the 500 naira note, a university in his native Anambra State amongst many others. One thing which is left is for the Federal Government to build his mausoleum so it can become a tourist attraction to keep his ideals alive.

Pro Chinua Achebe was born on this day 89 years ago in Ogidi in Anambra State. He was admitted to study medicine at the then prestigious University of Ibadan but he later switched to the arts – English and Religious Knowledge which made him lose the Eastern Regional Government Scholarship. His education had to be financed by his elder brother who noticed his arts potentials.

His first book, ‘Things Fall Apart’ which he wrote in 1958 at 28 is an evergreen classic. It went on to sell over ten million copies worldwide and has been translated into well over thirty languages. The book remains his most popular oeuvre. So popular is it that there is a joke in literary circles which goes thus:

‘Who is Africa’s most popular writer?’

‘Wole Soyinka.’
‘What is his most popular book?’
‘Things Fall Apart”
He went on to write ‘Arrow of God’, ‘No longer at ease’ – a sequel to Things Fall Apart, ‘The Man of the People’ and after a twenty-one year hiatus ‘Anthills of the Savannah’ in 1987 which was a shortlist for the Booker Prize.

In 1990, he had an accident while going for a Federal Government assignment. He was left to his fate and abandoned by the very government he served so diligently. He was later to relocate to the United States where he lectured Comparative African Literature in Bard and Brown University. He was also a visiting lecturer in many universities around the globe and his work ‘Things Fall Apart’ is the most popular to emerge from the African continent.

He was a public commentator and constructively criticized various governments and lectured frequently on good governance. His treatise ‘The trouble with Nigeria’ best describes his thoughts. He famously rejected the national honour of ‘Commander of the Federal Republic’ twice both under the Olusegun Obasanjo and Goodluck Jonathan led Presidencies opining that the nation unfairly treated his south-eastern people.

Many of his admirers were aghast that he didn’t receive the Nobel Prize for Literature but that didn’t diminish his towering stature as a writer one bit. He won the prestigious Man Booker Prize in 2007 for literature.

The contributions of Azikiwe and Achebe have ensured the immortality of their names which will permanently be etched in gold.