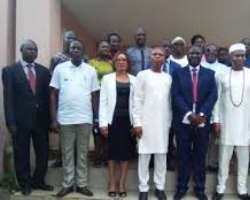 Delta state government has expressed dissatisfaction over the lackadaisical behavior of some teachers in government schools.

Executive Chairman of the State Universal Basic Education Board (SUBEB), Hon. Sunny Ogwu, Thursday expressed displeasure over unprofessional practices by some Teachers in one of the Government Primary schools at Okpanam in Oshimili North Local Government Area.

The Chairman who stormed some schools in Oshimili North and South Local Government councils unannounced on an inspection exercise to ascertain the level of compliance of both teachers and students to the high education standards set by the State, frowned against the inability of almost all the teachers at New Era Primary School, Okpanam to present their Lesson notes, and against those whose lesson notes were not up-to-date.

Ogwu who also expressed disappointment at the high level of vandalism especially of ceiling PVCs in class rooms, said that such attitude was unacceptable to the Board.

He queried one of the Teachers for improper dressing for wearing a T-Shirt, saying that such dress code was alien to the Civil Service Rules.

The Chairman and his team also observed poor performance of students in Mathematics in Primary five class, and advised the Class Teachers to use a better teaching method to improve the pupils performance in the subject.

The SUBEB boss who embarked on the surprise visit to the school was accompanied by all the Members of the Board, Hon. Mrs. Philomena Ededey, Chief Mrs. Lina Osuya, Mr. Paul Kurugbe, Secretary to the Board, Sir Byron Unini and the Director of Quality Assurance, Mrs. Demez Omoniyi.

The SUBEB Chairman and his Team also visited Uzoigwe Primary School Asaba, where he commended the Head Teacher and Teachers of the school for their conduct and called on all stakeholders including parents and guardians to be actively involved in checkmating school activities of their wards as well as that of teachers as according to him, the workload should not be left on Government shoulders alone.

While disclosing that the exercise would be a continuous one, he enjoined Teachers to be punctual to work and ensure that their lesson notes are updated.

Speaking at the end of the exercise, Member representing Delta North Senatorial District in the Board, Hon. Lina Osuya, disclosed that the inspection exercise was part of the mandate given to the Board and commended the State governor for his commitment in promoting quality education in the State.