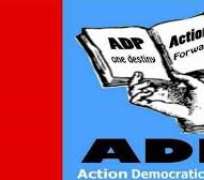 The Action Democratic Party (ADP), has called on citizens and all residents of Kogi and Bayelsa State, to conduct themselves in a very peaceful manner, before, during and after the Saturday's governorship elections.

ADP noted that, the election does not worth the blood of anyone, that they must resist any lure by those, who wants to gain power at all cost, thereby, will be willing to use force and violence to achieve their goal, urged them to resist and say no to violence.

ADP, in a statement issued by the National Publicity Secretary of the party, Prince Adelaja Adeoye in Abuja on Friday Morning, he called on the Chairman of the Independent National Electoral Commission (INEC), Prof. Mahmood Yakubu and Inspector General of Police, Mohammed Adamu, that the election must be conducted in a free and fair manner, and that the lives of every voters must be protected.

ADP noted that, the police and other Security agents, deployed to the affected states, should be able to arrest any form of violence or electoral manipulations which may occur.

We also urge the police to monitor and secure the lives of all the local and international election observers and media crew, who will be on ground to cover the elections.

ADP advised all the candidates, to call their followers to order, so that the elections can be conducted in a very peaceful way, without any hitches. Our party wishes the good people of Kogi and Bayelsa State, peaceful elections, asked them to choose the best candidates, who will serve them and bring succor to the lives of the downtrodden.