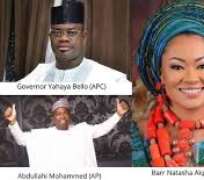 The Rights group said by delaying the release of the cash till the final hours to the election in which the All Progressives Congress incumbent Governor Alhaji Yahaya Bello is facing stiff opposition from the People’s Democratic Party’s engineer Musa Wada and SDP’s Miss Natasha Akpoti, the All Progressives Congress – dominated National Assembly and president Muhammadu Buhari have inevitably interfered in the Kogi governorship poll in an unlawful way.

Relatedly, the Rights group also reasoned that aside the last minute’s interference by both the presidency and the Senate, the current hierarchy of the Independent National Electoral Commission (INEC) have become irredeemably damaged by the credibility crises occasioned by the compromised and unethical conduct of the 2019 general elections which generated over one thousand post-election litigation.

In a statement by the National coordinator Comrade Emmanuel Onwubiko, HURIWA stated emphatically that there is now no level playing field for all the contestants because of the heavy financial inducements that may be occasioned by the late release of the huge #10 billion campaign largesse packaged dubiously as Federal government’s refund to Kogi state. The civil Rights advocacy group argued that ab initio there are no empirical evidence to support any claim that the administration of Yahaya Bello in the last four years executed any federal government's projects within the state to justify the dubious refund from the Federal government of Muhammadu Buhari.

“We absolutely condemn the senator Ahmed Lawan – led National Assembly for orchestrating the worst case of abuse of power which is what the approval of the #10 billion payment to an incumbent governor of same political affiliation facing a tough election, represents. We condemn once more the presidency for even coming up with such a dubious idea to reward the Kogi state governor who is yet to pay civil servants and teachers in Kogi state in the last four years with over a dozen of these unfortunate citizens committing suicide or collapsing to their deaths due to Kogi state government’s induced poverty, deprivation, want and impoverishment unleashed on Kogi working class. We do not repose any hope and trust on INEC to conduct a free and fair poll because it is not in the DNA of the current INEC to conduct transparent election.”

HURIWA wondered why only three days to the governorship election in Kogi State, the Senate went on to approve promissory notes and bond issuance of N10.069 billion to the state as refund for projects executed on behalf of the federal government. The approval on Wednesday was criticized by opposition lawmakers who asked that the approval be delayed till after the election.

They were, however, outvoted by majority senators.
"It would be recalled as we earlier stated Kogi, like the Senate and the federal government, is controlled by the All Progressives Congress (APC).The approval was a sequel to the adoption of the report of the Senate Committee on Local and Foreign Debts which considered the promissory note programme and a bond issuance to settle inherited local debts and contractual obligations on the refund to state governments for projects executed on behalf of the federal government. This is a coup attempt against the people of Kogi state by the APC dominated Senate and the Presidency. We urge Kogi people not to mortgage their state to the whims and caprices of cash for votes bandits parading around in the Country as politicians especially the species that have direct access to the Presidency that is heavily partisan and sectional".