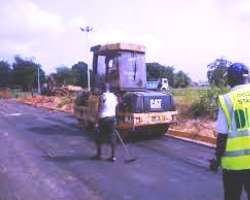 The DLA boss disclosed this recently while fielding questions from journalists during the Agency on the spot accessement tour of DLA facilities across the State explained that Delta State Direct Labour Agency would soon launch zero potholes campaign in the State, disclosed Gov. Ifeanyi Okowa readiness to Stronger Delta through massive construction of roads across the State.

Ajaino also noted that haven seen the state of the Agency Asphalt plants and other facilities, the present board would report back to the State Governor with the view to put them to use, solicited for support and cooperation from staff of the Agency to enable him and his board of Directors succeed, just as he warned against wasteful spending of funds given to them to work at the zonal offices.

The Agency Director-General and Board of Directors in the course to the facilities tour paid homeage to the traditional rulers where the Agency Asphalt plants is situated which include; the Obi of Owa, HRM Efeziomor 1, the Ovie of Agbarha-Otor, Okerefe 1 and the Ovie of Oghara Kingdom, HRM Orefe 111.

The traditional rulers enjoined the Director-General and his board members to be prudent in fund management, embark on rural-urban integration among others