Recent Promotions In The Nigerian Security Forces: Air Force, NPF And PSC Will Hear From Us

….promotions in the Army and Navy commendable, but…
By Intersociety 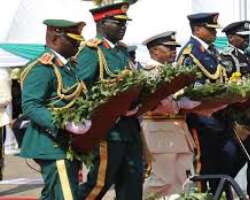 Onitsha, Eastern Nigeria, 13thNov 2019-The authorities of the Nigerian Air Force, the Police Service Commission and the Nigeria Police Force will soon hear from the Int’l Society for Civil Liberties & Rule of Law-INTERSOCIETY concerning gross lopsidedness in the recent promotions in the Nigerian Air Force and the Nigeria Police Force. We shall no longer allow a situation whereby such promotions rapaciously breach the secularity principles and socio-cultural pluralism of Nigeria.

Mindless and unchecked violation of the 1999 Constitution particularly her Sections 14 (3), 217 (3) and 42 and the acceded international treaty laws must also no longer be condoned. Since the political and security actors and authorities in Nigeria said and insisted that “Nigeria must remain one indivisible country”, then “the oneness” of the country must no longer be allowed to be a replica of George O’Neil’s ‘Animal Farm’ where ‘some animals are more equal than others’. Otherwise Nigeria must be allowed to live apart in peace, even if it means some nationalities living in extreme poverty, but with dignity, peace and security.

Intersociety remains uncompromisingly focused in campaigning for respect, protection and advancement of the constitutional and other human rights of all Nigerians irrespective of their places of birth, ethnic origin, religious affiliations, social and political status or class, gender and age. Nigeria must be structured and governed to give a sense of belonging, nationality, equality and development to all members of her ethnic nationalities. Otherwise, the country should be allowed to peacefully go ‘the USSR’ way.

By Section 14 (3) of the 1999 Constitution, ‘the composition of the Government of the Federation or any of its agencies and the conduct of its affairs shall be carried out in such a manner as to reflect the federal character (sectional balancing) of Nigeria and need to promote national unity, and also to command national loyalty, thereby ensuring that there shall be no predominance of persons from a few States or from a few ethnic or other sectional groups in that Government or any of its agencies’.


By Section 217 (3) of the same Constitution, ‘the composition of the officer corps and other ranks of the Armed Forces of the Federation shall reflect the federal character (sectional balancing) of Nigeria’; and by Section 42, ‘a citizen of Nigeria of a particular community shall not be discriminated against on the basis of his or her ethnic group, place of origin, sex, religion or political opinion or social status or class’.


Intersociety has continuously, vigorously, uncompromisingly and boldly led and still leading a serious campaign against lopsided composition or sectional imbalances in the composition of Nigeria’s security, political and justice establishments both at national and regional levels. In her 26th Sept 2019 field work, Intersociety found that 18 out of the country’s 22 top federal security and justice positions are presently occupied by Muslims as against only four for Christians.

Of the 18 top seats occupied by Muslims, 16 are held by Northern Muslims and out of the 22 top seats; none is given to the Southeast or mainland Igbo; with a general population of no fewer than 60m. Regionally too, of 73 top security commanders manning key military and policing formations in the Southeast and the South-south regions involving Directors of SSS, Police AIGs and State CPs and top military commanders, 65 are held by officers of other regions mostly of Northern Muslim religion, while only eight are from the two regions. The present official logo of the Nigerian Army also despicably and condemnably bears the ‘Arabic Islamic’ symbol.

Promotions In The Army & Air Force Commendable, But…

Of the recent promotions in the Nigerian Army involving 34 newly promoted major generals, the Southeast or mainland Igbo was given three, instead of five or six. It must be noted and reminded that the sharing principle or formula for the country’s top elective and appointive federal offices is the ‘six geopolitical regional or zonal formula’. The three new Igbo/Southeast major generals, out of the 34 promoted are Major Gens EC Onyemulu, CK Nwosu and OC Ajunwa. This is not totally acceptable, though a slight departure from the age-long status quo. The shortfall, therefore, must be corrected by the authorities concerned.

Of the 47 newly promoted Brig Gens, Southeast or mainland Igbo got eight, and among them are Brig Gens AOD Okoro, NB Ebulue, KO Ukandu, EI Okoro, KE Chigbu, SO Nwafor, CC Ogbu, Onyema Nwachukwu and GC Nkenke (?) This is highly commendable. The Nigerian Army is hereby commended over this. Additionally, the newly promoted Igbo Brig Gens must be assigned posts or duties other than ‘tea-making’. While the Brig-Major General promotion falls short of Sections 14 (3), 42 and 217 (3) of the Constitution, the Col-Brig Gen promotion is fully in conformity or compliance with the referenced Constitutional Sections.

In the area of promotions in the Nigerian Navy involving 17 newly promoted Rear Admirals, 32 Navy Commodores, 26 Navy Captains and 65 Navy Commanders, Southeast or mainland Igbo were given three new Rear Admirals out of the 17. They include Rear Admirals Vincent Okeke, Perry Onwuzulike and Chukwu Okafor. Out of the 32 new Navy Commodores, Southeast got five involving Navy Commodores Desmond Igbo, Nnamdi Ekwom, Michael Igwe, Ikenna Ubani and Emmanuel Anaekwe. We commend the authorities of the Nigerian Navy and gladly note that their promotions sufficiently conform to Sections 14 (3), 42 and 217 (3) of the 1999 Constitution.

The recent promotions that took place both in the Nigerian Air Force and the Nigeria Police Force are noted with strong condemnation. The promotion lopsidedness particularly in the Air Force’s ‘Air Commodore-Air Vice Marshal’ and Police’s ‘CP-AIG’ is a total violation of Sections 14 (3), 217 (3) and 42 of the 1999 Constitution. It particularly saddens our heart that out of the 13 newly promoted Air Vice Marshals, only one(AVM Cosmos Ozougwu) was allocated to the Southeast or mainland Igbo. Protested, though with slight commendation, is the fact that out of the 35 newly promoted Air Commodores, Southeast got five, instead of six. The five Igbo new Air Commodores are Japheth Ekwuribe, Emeka Ashiegbu, Chidiebere Obiabaka, Boniface Ifeobu and Azubuike Chukwuka.

Strong Condemnation Of Promotions In The Nigeria Police Force

The controversial promotion exercise also saw promotion of retiring CP Alex Okpara and AIG Adeyemi Samuel Ogunjemilisu to the rank of Police DIG. They were ordered to proceed on pre-retirement leave. The promotion of the two to DIG at the twilight of their retirements is strongly condemned. It is also a creation of unnecessary financial burden on the country’s lean public funds whereby they will be made to earn fat pensions and gratuities as ‘retired Police DIGs’ without serving the country even a single day as Police DIGs.

PSC, NPF & Air Force Will Hear From Us
The elevation of the 13 Northern Muslim CPs to AIG comes when no Igbo or Southeast senior Police officers are among the country’s serving AIGs, numbering about 26 and the country’s 12 Police Zonal Commands headed by AIGs. The authorities of the Police Service Commission, the Nigeria Police Force and the Nigerian Air Force will, therefore, hear from us in coming days.