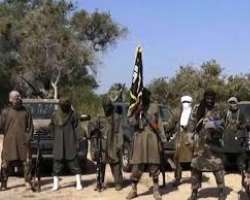 Reporst from Rann reveals a hideout of Boko haram terrorists at Ndufu village, a boarder community to Ngala.

The BHTs are presently there in their numbers. Also the selling of illicit drugs in public within the IDP camp in Rann Hqtrs of Kala Balge is alarming despite the efforts of Relevant stakeholders to Stop the illicit trade.

Meanwhile, some of the IDPs presently are exposed to severe hardships and sufferings due to food scarcity and flood disisater which ravaged part of their camps as a result of flooding of River Kaalia from Cameroon Republic.

An NGO worker, Mohammed Sani told our correspondent that currently, the IDPs are complaining of food shortage and lack of clothing.

He added that even those who cultivated their farmlands are afraid of going to harvest the crops as a result of the activities of the BHTs in the area and fear of being attacked or killed by the insurgents in their farmlands.

According to him, most of the IDPs are stranded and urged the Government to intervene as there is the need for relevant stakeholders to urgently reach out to the IDPs in Rann to salvage the situation.