*Says it would amount to double standard since some Moslem corpers wear hijab:
By Human Rights Writers Association of Nigeria (HURIWA) 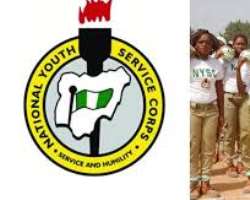 HURIWA said the two female corps members in the 2019 Batch C Stream 1 in Ebonyi camp were de-kitted for reportedly refusing to wear shorts, trousers just as the Batch C members of the corps are currently undergoing the three-week orientation exercise nationally.

The Rights group quoted the spokesperson of NYSC in Ebonyi State, Ngozi Ukwuoma as alleging that the two corps members were spotted by the Camp Director, Mrs. Isu Josephine, and her team during a routine morning inspection even as Ukwuoma said the two ladies were wearing their official white T-shirt upon white skirt. Officially, white T-shirts are worn atop a pair of white shorts.

HURIWA recalled that the spokesperson said, “efforts were made by the office of the CD to make them see reason why they must obey the rules and regulations guiding the orientation and NYSC, but all efforts to do that proved futile even as the matter was officially reported and the proceedings for de-kitting were initiated with the corps members queried and subsequently made to face the camp court, where they were found guilty, having stated categorically that they were ready to bear the consequences of their actions.

HURIWA said although the NYSC's court recommendations were submitted to the camp management and the camp director was directed to de-kit in the presence of security agents, who also escorted them to the gate as they left the camp, but the Rights group in a statement by the National Coordinator Comrade Emmanuel Onwubiko and the National Media Affairs Director Miss Zainab Yusuf said the unanimous decision of the Rights body is to communicate to the management of the NYSC in Abuja to pray that the two rusticated corpers be recalled given that their objection was supported by their religious faith.

HURIWA said it is imperative that a universal standard of regulations are observed in a national integration scheme for the youthful Nigerians like the National Youth Service Corp (NYSC) but stated that it would be unfair and unjust to allow Moslem corpses who want to wear hijab to so do but at the same time to deny other faithful religionists different from the Islamic faith group the same privileges accorded the MOSLEMS since this would amount to a violation of section 42 of the Nigerian Constitution of 1999 as amended.

HURIWA said also: "We as a dedicated group of patriots believes that constructive dialogue is the best approach in all kinds of issues. The matter of religion is such a delicate issue that it would be better we deemphasize it in official matters. But in this instance, we are persuaded that the decision to dismiss these two corpers is wrong and needs to be reviewed and we have initiated a way of approaching the Director General of NYSC to direct that the two corpers be recalled and reinstated to serve Nigeria their fatherland. We are in receipt of an information from the NYSC which was published in a section of the media in which the management approved White Hijab For Corps Members. The National Youth Service Corps had said that it will allow female corps members, who are Muslims, to use white, shoulder-length hijabs for religious purposes. This was made known in a document released to newsmen in Abuja. The NYSC also added that only three types of dressing used for different occasions would be acceptable for corps members. The document reads. The modes of dressing for corps members are classified into three categories, which are used for different occasions. One, within the camp during the orientation programme, their normal attire, except otherwise directed, consists of a pair of white shorts with a white vest and white canvas shoes and socks. Two, for ceremonial purposes, the proper dressing is crested vest on top of a pair of Khaki trousers".

HURIWA said it will ask that the dismissed corpers be reinstated immediatelly to avoid undue litigation unless and except the management will maintain the usual official dress codes that are time tested and time honoured and that are not guided by religious or cultural persuasions. "What is good for the goose is good for the gander in our honest thinking. If Moslem corpers can wear hijab we thunk it is only right that other religious dress codes are allowed since Nigeria under section 10 is not a religious state whereby one religion is elevated as a state religion. ".