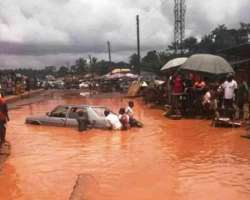 A few weeks ago, residents of Owerri, capital of Imo State, sang the good old rhyme of “Rain, rain, go away” in their hearts as the heavens pounded the earth without relenting. Commuters who travel daily from the hinterlands and the suburbs to the city to do business or to their respective work places were experiencing days of anguish. The “China” roads bequeathed to the people of the state by the past administration had eroded, leaving chains of deep gullies that hampered vehicular movement.

The people counted their losses in materials and man-hours, going through stress daily on the waterlogged roads and beckoning the new administration to do something fast.

The rains have receded, but the potholes and gullies they left are still constant reminders of resources wasted on the rescue missionaries’ substandard roads that barely lasted a season. The new helmsman at Douglas House, Gov. Emeka Ihedioha, has given hope, only hope, which the people are praying to manifest into motorable roads in months to come.

It is imperative that the roads are done in a very good time, considering that the economy of the state is in shambles even as taxes on the common man are increasing. The good roads are needed to step up the tempo of business in the state so that the people would have easy movement, do their business and be able to cope with the hard times. As the Heartland of the East, Owerri ought to be the toast of investors and tourists due to its central nature. But, how many of these investors and tourists can cope with the bumpy roads? They are discouraged by the roads in the metropolis and beyond. This is a minus for the state’s economy.

Ihedioha has expressed deep interest in bringing the state back to its lost glory as the cleanest state in the federation. For this reason, he had gone to Mbano to drag out the king of clean and green, former governor Ikedi Ohakim, to head the committee that would make it happen. And the former governor stooped to the job, ears closed to tauntings. It is common knowledge that wailers in the state, whose tears are yet to dry off since the green-cap governor came on board, are insinuating that the former governor was broke and needed the job to rehabilitate himself. Others jeer at him for accepting to be onye oburu (check that up, please). Undaunted, that son of a world war veteran has shown an uncommon enthusiasm to return the state capital to the path of cleanliness and beauty. This he cannot do with our roads in their present state.

In the agonising rainy days, people passed through extreme stress, such that as soon the clouds gathered, those yet to return to their abodes develop high blood pressure, wondering how they would make it back home after a hard day’s work. The vehicles meander and dance dangerously on the roads, inflicting physical pain on bones and body tendons and making road users to die in instalments. Again, our health institutions are ill-equipped to cope with the attendant health hazards created by the cumulative stress from these bad roads.

A growing trend in road traffic in Imo State today is the penchant among many motorists to ply the opposite lanes in most of the dualised routes in the state capital of Owerri and other high ways.

Flashpoints where this trend is rampant include the now opened Douglas road, the stretch between Dan Anyiam Stadium and MCC/School road junction on Wetheral road, parts of World Bank housing Estate road, Akwakuma Junction, stretching to the highway leading from Owerri to Orlu. It becomes even more worrisome as this violation of traffic rules occurs on the Njaba Bridge and persists from the International Secondary School bus stop up to Banana junction.

This trend is disturbing because it is capable of causing, if it had not caused, road accidents that could sometimes be fatal. Where it does not result to an accident, the stress and anxiety it evokes in unsuspecting road users, motorists and pedestrians alike, are such that they could develop a nervous breakdown or even high blood pressure which might lead to death ultimately.

Coupled with this, routes that, in the past, were designated one way in the interest of freer traffic flow are now being violated without the usual arrests by law enforcement agencies. Roads such as School Road, leading into the Eke Ukwu Owerri, among others, have been converted to two-way, and the chaotic traffic experienced at its junction with Tetlow Road is enormous.

Part of our regrets over the dilapidated condition of our roads is that humongous sums of money were expended on these roads barely one year ago. That we are back to square one is evidence of the poor quality of the roads and puts a doubt on the qualification of those who built them. We recall that as construction was on, the masses muffled their doubts, but the Council of Registered Engineers (COREN) cried. The authorities never bordered to listen. And the money is down the drains

With the rains going away, there are signs that something is being done in the various bad portions of the roads where construction equipment have been moved to. Are they healthy signs for the Mbaise-born governor who had almost been seen as competing with “baba go-slow?” Let’s wait and see.

Odu can be reached at [email protected]