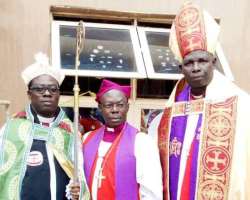 Two Nigerians were on Sunday, November 10, 2019 in Lagos installed as members of House of Bishops (HOB), the highest decision making body of Worldwide Anglican Church (WAC).

Those installed by the Church’s Patriarch, Archbishop Christopher Lwanga Tusubira from Uganda were Most Rev. Akinbode Oke who became the Primate and Archbishop of West Africa and Rt. Rev. Seun Adeoye as Lead Bishop, West Africa of WAC.

Both Oke and Adeoye will join 10 other archbishops and six bishops across the world as members of HOB and this would be the first time any Nigerian will occupy such a position in the church. Other Nigerian Bishops enthroned during the event.

Earlier, Tusubira had inaugurated WAC in Nigeria and issued the Church’s certificate of Apostolic Succession to six Bishops who decided to join and operate the Church in Nigeria while new Bishops and priests from West Africa and Cameroon were also ordained.

Speaking during the occasion, Most Reverend Tusubira charged leaders to be humble, honest and make rules that will make people to follow peace.

He regretted that in Africa, most political leaders were those leading their people to rig elections and keeping corrupt individuals around themselves.

He further chided those in political office who have deliberately turned the constitution around and change rule which keep them in office perpetually.

“Leaders must live by example and give speech that will encourage their people. They must not lead people to do evil and must do everything to protect their people”, he stated.