…RERUN ORDERED IN ONE LGA WITH EKPENYONG LEADING BY 38,000 VOTES
By Akwa Ibom State Divine Mandate 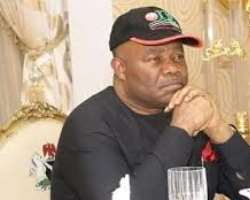 last gasp by Senator Godswill Akpabio to legitimize a whopping 61,329 votes from one of the ten local government areas of AKwa Ibom North West Senatorial District in the last national assembly elections has been rejected by the Court of Appeal, sitting in Calabar, Cross River State.

At the Appeal Court in Calabar, the five man panel ruled that a fresh election be rather conducted within 90 days in Essien Udim local government, as a result of irregularities which all parties had admitted in their separate addresses.

Results obtained from the other nine local government areas show that Senator Chris Ekpenyong leads with 114, 973 votes while Akpabio has 76,917.

Akpabio who lost the election to Chris Ekpenyong by 83 ,158 votes to 118 ,215, had approached the Appeal Court to seek the order of the court for the illegal figures he allocated to himself, after losing to Chris Ekpenyong in 8 of the 10 local government areas of the district.

The Independent National Electoral Commission had confirmed that only 19,455 voters were accredited in Essien Udim local government area during the election and had rejected the illegally manufactured scores that Akpabio appropriated for himself.

This INEC decision was upheld by the National Assembly Elections Petitions tribunal in Uyo, which decided that the 61,329 votes claimed by Akpabio were inconsistent with the number of accredited voters during the February 23 elections.

Going into the rerun, Akpabio is expected to register a minimum lead of 38,056 margin to upturn the election of Senator Chris Ekpenyong.

He is also expected to resign as Minister under the law to be eligible to contest election.

Similarly, the Appeal Court has also ordered that a fresh election be conducted in Essien Udim local government area for the House of Representatives Seat between the incumbent Nsikak Ekong of the PDP and Emmanuel Akpan of the APC.

Ekong will also go into the election with the lead garnered from his victory in the other two local government areas of the federal constituency, Ikot Ekpene and Obot Akara.