The sidelining of Prof. Yemi Osinbajo 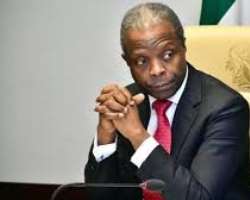 In 2014, the now ruling All Progressives Congress (APC) was hurriedly formed by some progressives spearheaded by the former Governor of Lagos State, Asiwaju Bola Ahmed Tinubu to wrestle power from the then ruling Peoples Democratic Party (PDP) under the presidency of Goodluck Ebele Jonathan.

After Buhari won the primaries, there came the issue of his running mate. Naturally, Tinubu was interested in it but due to religious considerations as the June 12 scenario of a Muslim-Muslim ticket wasn’t feasible, had to give it up. He then proceeded to nominate his erstwhile Attorney-General and Commissioner for Justice, Prof Yemi Osinbajo for the vice-presidential ticket.

History was made when an incumbent was dislodged and the duo settled down to the arduous task of governance. Osinbajo was given the prime responsibility of chairing the economic management team amongst other tasks that were assigned to him.

Osinbajo proved to be loyal to his boss when Sai Baba as he is fondly called was holed up in a London hospital for three months attending to an undisclosed ailment which some sources say was rather life threatening. He held forte for him relatively well. It is instructive to note that Buhari transmitted power to him through the National Assembly a clear departure from the refusal of late Umaru Yar’adua who didn’t do the same to Goodluck Jonathan and left the country at the mercy of the heartless cabal who did as they wished.

After the Second term was won, the body language of Sai Baba began to sing an entirely different song as a new Pharoah came to power who didn’t know the Biblical Joseph.

The economic management team was disbanded and in its place the economic advisory council headed by renowned economist and academic at the Lagos Business School, Pan Atlantic University was constituted. This is the first time in Nigerian history that the Vice-President will be stripped off the management of the economy which is his traditional function. Next came Buhari’s departure to Saudi Arabia and then to London without the constitutional transmission of power to him. This necessitated the powerful Chief of Staff, Abba Kyari going to London to get him to sign the Deep Offshore Bill when Osinbajo was still in the country.

The aides of the Vice-President were then asked to relocate from Aso Rock to somewhere in Abuja and then the latest was the firing of thirty-five of them. Despite the denial by his spokesman, Laolu Akande, the Presidency was later to affirm their firing.

What could have happened to the smooth relationship that existed between Buhari and Osinbajo? What could be the source of their unexplained friction? Some pundits opine that the answer lies in the ambition of the former law Professor at the University of Lagos to succeed his boss in 2023. Others say that the crisis is being orchestrated by his political godfather who also has the sobriquet ‘The Lion of Bourdillon’ who is also interested in the coveted seat.

Abba Kyari is clearly now the de facto Vice-President as Buhari asked all the ministers to report directly to his office.

I saw this coming when Osinbajo was being asked to share the ten thousand naira in the ludicrous trader moni scheme shortly before the 2015 elections. The highly esteemed office of the vice-president and personality of the Senior Advocate of Nigeria was reduced to that of a motor park tout by dancing up and down in the market squares before the tired eyes of hapless market women.

The Daura born retired general just wasn’t in a hurry to act so as not to jeopardize his second term chances. The politically naïve Prof has simply been used and dumped in the old Mafia fashion style.

The 1999 constitution needs to be amended to give a role to the vice-president as well as deputy governors to avoid the conflicts that have happened between their bosses since 1999. In the United States of America where we copied their presidential system of government from, the vice-president has no powers beyond being the ceremonial President of the Senate who acts as a vote tie breaker. The office is so insignificant that their first vice-president and later second president John Adams had this to say about it“My country has in its wisdom contrived for me the most insignificant office that ever the invention of man … or his imagination contrived or his imagination conceived.”We need not copy Uncle Sam hook, line and sinker as there is the urgent need to adapt their wonderful system to suit our local needs.

Some pundits have been calling for the resignation of Osinbajo but in a country and continent where there is the prevalence of sit-tight leaders, I doubt if the Prof will be ready to go back to his Simon Coopers law firm just yet. Some Yoruba elders even backed the non resignation call for the number two man so he is likely to still be in the saddle until his term expires.

The best way to avoid this needless ego clash is for the National Assembly to get to work and do the needful; anything short of this will see the continuation of this theatre of the absurd.