VP Osinbanjo Should Resign. It Is The Most Honourable Thing For Him - Afenifere 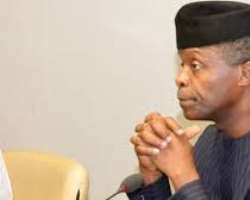 The Yoruba socio-political organisation, Afenifere has charged the Vice President, Yemi Osinbajo to resign his position, following reports of his office being undermined.

Afenifere said Osinbajo should do exactly like the former Chief of Staff to ex-Military Head of State, Ibrahim Babangida, Commodore Ebitu Ukiwe who stepped down after certain decisions were taken without his knowledge.

National Publicity Secretary of Afenifere, Yinka Odumakin gave the call in a reaction to the reports that some aides of the Vice President were allegedly sacked by President Muhammadu Buhari.

Speaking with Vanguard Thursday, Odumakin said stepping down was the most honourable thing for Osinbajo to do at this point in time.

He said: “I can’t fathom what Osinbajo is still doing in that place. He is a Yoruba man and our people say Iku da jesin (Death is more honourable than certain indignities). Except if he has become a hostage of a sort.

“This is the time to remember Ebitu Ukiwe, who resigned as IBB’s Chief of General Staff because some decisions were taken about Nigeria without his knowledge. That was under military rule based on fiat.”