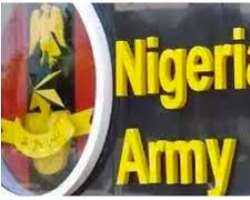 Inaugurating the General Court Martial at the Maimalari Cantonment, Maiduguri on Thursday, the GOC said, " in pursuance of the powers conferred on me as the Acting GOC of the 7 Division, Nigerian Army , under section 131(2) (d) of the Armed Forces Act CAP A20 LFN, I hereby innugurate this 7 Division General Court Martial on this day 7th November 2019."

"The Military World over are known for the maintenance of discipline and decorum while discharging their duties. The ability of the military to ensure success in operationss is better achieved when the ethics and traditions aimed at enhancing discipline are encouraged.

" In this regard, acts of cowardice, desertion, unsoldierly behaviour and other forms of indiscipline have no place in the army . More so, an army executing war. It is against this background that I decided to convene a General Court Martial under my command.

" The powers conferred on me as a General Officer Commanding under section 131 sub section (d) of the Armed Forces Act CAP A20 LFN are brought to bear in fulfilling this command's resoonbility", Abdul said.

He further said ," this court does not have any special interest to serve rather than routine duties carried out within the legal confines of regimentation.

" This goes to shows that the principle of natural justice , equity and fairness, which are enabling pillars of this General Court Martial. Will surely guide its conducts throughout ", Khalifah added.

The GOC however called on the President and members of the General Court Martial as well as other stakeholders to remember that an enormous task is placed on them and they should endeavour to discharge the task fairly.

He therefore, wished them wisdom and courage to function in accordance with the dictates of natural justice and fairness to all.

Also speaking, the Judge Advocate of the Court, Captain Aminu Mairuwa said about 80 soldiers are facing trial for various offences of cowardice, abscondment, indiscipline and insubordination among others.

He said ," this court is equivalent to High Court and it's judgement could be appealed at the Court of Appeal."