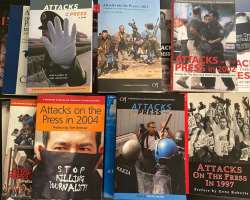 He couldn’t have known it at the time, but when a Moroccan court sentenced editor Mohammed al-Herd on August 4, 2003, to three years in prison, he was emblematic of a new trend, one that would accelerate and continue to the present day.

Because of an article published in his weekly newspaper Al-Sharq, Mohammed al-Herd , then 34 years old, was charged and convicted for extolling terrorist acts, CPJ reported at the time. The article – which was actually a reprint from another publication – was penned by an Islamist activist and discussed alleged ties between the Islamist movement in Morocco and the country's intelligence services, which it criticized for doing the "dirty work" of the CIA.

In the years that closely followed the September 11, 2001, attacks on the United States, governments around the world passed a raft of anti-terror laws, then proceeded to exploit those laws to silence critical journalists covering sensitive issues such as insurgencies, political opposition parties, and ethnic minorities. (CPJ published an analysis by Monica Campbell in the 2012 edition of our book, Attacks on the Press.)

A newly updated database on CPJ.org visualizes this trend – and how it combines and contrasts with other trends in decades of research on journalists who have been imprisoned or killed or who have gone missing because of their work since 1992.

It turns out that 2000, the year before the September 11 attacks, was the brightest spot on a 25-plus year timeline of global press freedom. The 94 journalists imprisoned that year are the fewest counted in any CPJ census since we started doing an annual count. What’s more, the 24 journalists killed in the line of duty that year is the second lowest number in our annual records (behind only 2002, when 21 journalists were killed).

As the 2000s progressed, scores of journalists died covering the wars in Afghanistan and Iraq, and dozens more in the Arab uprisings and civil wars that followed. Furthermore, new technology both enabled more people to practice journalism and enabled non-state actors to take their message directly to their desired audience, so they valued journalists chiefly as props for their violent propaganda.

Is that partly because smartphones meant more photographers? I can’t immediately say, but I encourage you to test the hypothesis, to access CPJ’s data and integrate it with your own work. The more people who study and promote the fundamental democratic value of freedom of the press, the better. We are beta testing an API (application programming interface).

Earlier, I mentioned CPJ’s book, Attacks on the Press, which we last published in 2017, the end of a long evolution. In fact, Attacks on the Press started out, in 1987, as a “database” of its time – a 50-page printed survey of press freedom violations worldwide. Over time, CPJ added regional and global analyses, but in the digital age, an annual publication ceased to make sense. Going forward, we will brand the data section of our website “Attacks on the Press,” returning the title to its roots.

Building this database took years and many hands, and included a one-time revision of the historical imprisoned numbers as we cleaned up duplication; counted people from the date of their arrest rather than the date CPJ learned of their case; and retroactively applied our imprisoned methodology as consistently as possible. We are far from finished. For example, we hope to add more beats by which to filter--environment and migration come to mind--and improve and expand the charts, which are tricky because of our different methodologies . [The funding to get to this point was generously provided by the Knight Foundation; Nine Labs built the new database and API, on a bedrock repository built and maintained by Backspace. Former CPJ staffers Jason Stern and Livia Rurarz-Huygens helped to reconcile and streamline 25 years of complex data. And of course, a few generations CPJ program staff initially collected all the information, while countless lawyers, relatives, and journalistic colleagues working in repressive environments had the courage to share it with us.]

Of course, data tell us about numbers and patterns, but they don’t tell us about people. Our website now has a page with a unique URL for each journalist imprisoned, killed, or missing. You can read and share their stories and call for their release, for justice in their killing or accountability in their disappearance.

As for Mohammed al-Herd, he and another jailed journalist in Morocco staged a 39-day hunger strike to protest their imprisonment, according to UPI, before he was pardoned by the king (for a crime he didn’t commit) and released on January 7, 2004. Now 51, he still edits and manages Al-Sharq. He recently told CPJ that Parkinson’s disease has slowed him down, and that his doctor attributed the diagnosis in part to his time in prison. He pleaded for all governments to stop harassing journalists, including Hamid al-Mahdaoui , currently jailed in Morocco. He said: "I devoted my life and my health for truth, without fear, and for news, without falsehood.”