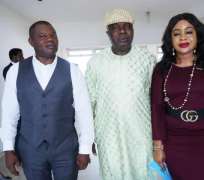 A team from Union Bank head office led by Mr. Fatai Baruwa addressed the leadership of OPC at the annual seminar of the group which held at NITEL Complex, Cappa-Lagos, on the preparedness of the financial institution to seal a working relationship that will provide various banking services to OPC members. "We will work with the national executive of the OPC to change the image of the organisation. We are looking at meaningful ways of sustaining members of the OPC in their different trades and helping those who have acquired a skill to maximise its use. Together, we can create wealth."

Suing for peace among contending Yoruba groups, an Ibadan High Chief, Lekan Alabi, regretted that Yorubas have suffered a setback in their economic and political advancement, owing to friction within the ethnic group. He said, "The OPC must unite and then harness its efforts with other Nigerian ethnic groups to ensure fairness and equality without which the country cannot make enviable progress." Offering scores of training and employment opportunities to OPC members, a security expert and Chief Executive Officer of Crime Alert, Mr. Gbenga Olaniyan, expressed willingness to equip OPC members who are ready to go through the reformatory process that will transform them to knowledgeable security personnel.

According to Olaniyan, the joint undertaking between OPC and Crime Alert, working with other security agencies in the country can successfully reduce incidents of kidnapping and armed robbery in the country to the barest minimum. While declaring a marked departure from the past, President of OPC, Prince Osibote stated that he is charting a new course for the leadership of the group which passed to him at the demise of its founder, Dr. Frederick Fasehun.

"Osibote said, "We must take back the battered image of the group. The OPC is one. There is no division. Those who left us are free to return, if they wish. There is room for them. But my leadership will not tolerate idleness. Every member of the OPC must be engaged in a gainful and productive job. We will not allow miscreants to hide under the OPC to cause trouble."

Praising the management of Union Bank for entering an understanding with the OPC, Osibote said, "This is a historic moment for OPC. We are happy to work with a bank that has a rich heritage and close to 300 branches all over the country. The OPC is about to enter another phase in its history."