77-year-old arraigned in court over possession of Indian hemp 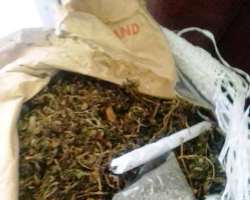 A 77-year-old man, Adebayo Kareem has been arraigned before a Magistrate Court in Osogbo for allegedly having in his possession Indian hemp/ Marijuana.

The Prosecutor, Inspector Idowu Racheal told the court that on 5th of November, 2019 by 05:30pm at odoofin compound in Okuku, the accused was caught having in his possession one bag huge quantity of dried leave suspected to be Marijuana/ Indian hemp.

The Prosecutor stated that the old man is afraid of prison, he is an ex-convict and has always been arrested by NDLEA officers often and told the court that he has been selling the Indian hemp before he lost his sights.

Mrs. Idowu told the court that the old man cause breach of peace of the society and committed an offence contrary to and punishable under section 249(d) & 430 of the criminal code Cap 38c of Law of Osun State Nigeria 2003.

The accused pleaded not guilty of the two count charge and has no legal representative.

The Magistrate, Mrs. Risikat Olayemi transferred the case to Chief Magistrate Court in Okuku considered the accused for Police bail and adjourned the case till 14/11/19.