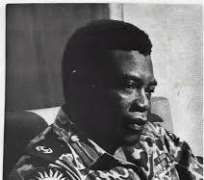 The Biafra Nations Youth League, BNYL, has described late Biafra second in command, Obong Philip Effiong as a great icon whose legacy deserves to be followed. Recall that the civil war hero died on November 6, 2003, sixteen years ago today. Nationwide Leader of BNYL, Princewill Chimezie Richard in a video published by BBS TV online early today gave reasons why Effiong surrendered. He said that the starvation and massive destruction of lives in Biafra forced the late leader to end the war after assumption of office as acting head of state of Biafra.

He said the BNYL will be remembering the late hero every 6 of November.