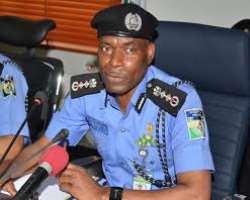 The Nigerian Police force has convened an all inclusive Northeast Security Sumiit in Maiduguri, Borno state capital with a view to addressing Boko Haram insurgency, kidnapping, armed robery , assassination, homicides and all other crimes in the region.

Speaking at the Security Summit which was held at the Government House, Multi Purpose Hall Maiduguri, the Inspector General of Police, Alhaji Mohammed Adamu said ,” the increasing complexity of crimes and the challenges of policing in a vast and diverse country like ours make it imperative that a people oriented approach be adopted."

"Public trust consent and partnership are the foundation upon which policing rest," Adamu said.

According to him, the event iwas convened within the context of community policing initiative and as part of the strategies of the Nigerian police to employ an all inclusive approach towards aiding police in the achievement of internal security mandate while the policing methodology is essential for number of reasons.

He said ,” in order to police the nation in the most cost effective manner, it is imperative that we draw in our historical heritage and leverage on our traditional strength as a country.

"Incidentally, communities in the Northeast and other parts of Northern Nigeria have a unique traditional structure which rnake the traditional Rulers to maintain an effective cultural and social control over their subjects", Adamu said.

The IGP added that the summit was the third of its kind in the series that have convened with the support of Executive Governors of the Northwest, South East and other partners.

He maintained that the one held in Kastina in August this year and the one held in Ibadan have been yeilding positive results while expressing optimistism that the Northeast security summit will also profer solutions to the challenges of the Boko Haram insurgency, armed robbery, assassination and kidnapping among others.

The Borno State Governor, Prof.. Babagana Umara Zulum appealed to the military and other security agencies to ensure the return of peace and restoration of civil authorities in the rural communities across the state for the citizens to enjoy real restoration of peace back to the northeast.

" I call on the military to take the fight to the Boo Haram insurgents, their hideouts are well known and also ensure civil authorizes are restored in all communities.

" I also want to urge our military and other security agencies to allow our people to go back to farm and other business activities., more especially, in the Lake chad fringes", Zulum said

He further said " there is need for paradigm shift from kinetic force to a more robust dialogue through “Operation Safe Corridor” while pointing out that he believe at the end of the summit, participants will come out with a road map to ending Boko Haram insurgency and produce a blueprint for post insurgency rebuilding process.

In his message, the Yobe state Governor, Alhaji Mai Mala Buni said ” Yobe State is ready to partner with the Federal and other security agencies to end insurgency in the northeast..

"There is also need for continued dialogue between federal and state governments, military and the insurgents for a lasting peace," Buni said.

Earlier in his remark, the President of the Senate Senator Ahmed Lawan said ,“Security is the cardinal essence of government. We in the National Assembly are ready to do everything possible to end insurgency even if it’ means allocating the wholel budget on security.

"The budget allocated to the security sector is inadequate to enable the military have the needed weapons and equipment to contain the insurgency", Lawan said.

Senator Lawan who was represented by Senator representing Southern Borno, Senator Mohammed Ali Ndune said “the National Assembly is deeply concerned and touched by the prolonged insurgency in the Nirtheast. The president have so far allocated the sum of N35 billion to Northeast Development Commission".

" I therefore urge the MD of the commission to spend the budget before the end of the budget year to avoid the money being remitted back to the Federal government covers", Lawan said.

Also speaking, Governor Bala Mohammed of Bauchi state who was represented by His Deputy, Sen.. Baba Tella said “I call on the National Assembly to create and enable law for the establishment of special security fund rather than following a normal budgetary process to allow the security agencies tackle the security challenges facing the nation.”