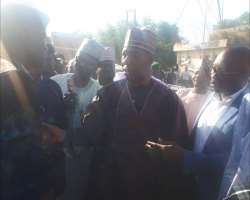 Governor Babagana Umara Zulum of Borno State has announced a donation of N50 million to the 75 victims of GSM Market fire dissadyet that engulped the market after close of business of the day on Thursday night last week around 8 pm.

However, the root cause of the inferno is yet to be unravelled as the market has not been using PHCN electricity source in the market since about two years ago. They rather use their personal stand by generator throughout their Operation period at the market or solar energy light between 8 am and 6 pm daily.

The governor out of his usual magnanimity announced the N50 million cash donation when he personally visited the GSM Jagwal market Sunday night immediately on his arrival to Maiduguri after returning from his official foerign trip to Saudi Arabia.

He however sympathized with the victims and prayed Allah to avert future reoccurrence.

“May Almighty Allah in his infinite mercy avert future occurrence; I wish to express my appreciation to the fire service, the Nigerian Police and all other paramilitary that have worked tirelessly to curtail the fire outbreak. I am hereby announcing the sum of fifty million (50M) Naira support to the victims", Zulum said.

Governor Zulum after going round the GSM Jagwal market to assess the extent of damage of property he later addressed the mass crowd at the GSM market that gathered there to receive him.

While addressing them, he announced his administration's plan to immediately relocate the GSM Jagwal market to its permanent site which was biult by the immediate past governor of the state, Hon. Kashim Shettima at Bulunkutu AP Yan Nono along Old Jos Road.

“But most importantly, we have to understand that, this place is too congested for you. The government will mmediately look into the possibility of relocating all of you to your permanent site at Bulunkutu AP Yan Nono, along Old Jos Road.

"The structures have been completed and commissioned by President Buhari and ready for use with adequate space for you business", Zulum said.