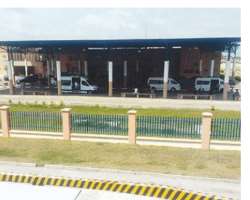 Nigeria had closed all land borders with neighbouring countries in October, following an earlier closure of its borders with its western neighbour, the Republic of Benin in August.

The memo was dated November 1, 2019, and addressed to the Sector Coordinators of the Joint Border Operation Drill – Sectors 1, 2, 3, and 4.

Dimka noted that the exercise has recorded “overwhelming success,” considering its benefits to the nation’s economy and security.

He, however, said the Customs have observed that a few strategic objectives have yet to be achieved, necessitating the extension.

I am directed to inform you that it is observed that despite the overwhelming success of the operation, particularly the security and economic benefits to the nation, a few strategic objectives are yet to be achieved.

Against this background, Mr President has approved an extension of the exercise to January 31, 2020.

Consequently, you are requested to convey the development to all personnel for their awareness and guidance.

Meanwhile, allowances for personnel sustenance and fuelling of vehicles for the period of extension will be paid as soon as possible.

This is for your information and necessary action, please.

The exercise is being conducted by the Customs in collaboration with operatives of the Nigeria Immigration Service (NIS) and other security agencies.

In an interview with Channels Television in August, the Comptroller-General of NIS, Mr Muhammad Babandede, had said, “There is no border closure but there was a border drill and there was an announcement from the office of the National Security Adviser (NSA).”

Two days later, President Muhammadu Buhari confirmed that there was a partial closure of Nigeria’s borders with the Benin Republic when he met with the country’s President, Patrice Talon, in Japan.

He attributed the development to the massive smuggling activities that have taken place on that corridor.

President Buhari said Nigeria has saved huge sums of money which would otherwise have been expended on importing rice using the nation’s scarce foreign reserves.

On October 14, the Comptroller General of Customs, Colonel Hameed Ali (rtd), announced that Nigeria has saved N1.4 billion naira since the exercise commenced.

He also revealed that a total of 317 suspected smugglers and 146 illegal migrants were arrested during the period.

The Customs boss was happy that the border closure was yielding the desired results as the nation’s consumption of petroleum products had dropped by 10.2 million litres.