Ebonyi PDP to sanction members making nocturnal moves ahead of 2023. 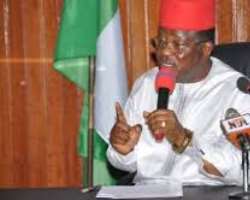 Ebonyi State Chapter of the Peoples Democratic Party (PDP) has stated her prepardness to sanction members who have started pursuing their inordinate ambition ahead of 2023 general elections saying it is coming at odd time.

In a press statement by the State Chairman of PDP, Barr. Onyekachi Nwebonyi, the party disclosed that some of its members are already forming various foundations ahead of 2023 and warned them to stop such moves immediately.

Nwebonyi said the party is not just against such nocturnal moves, but frowns at it; especially as it is coming at a very odd time.

He however, urged all party members to be focused in supporting Governor David Umahi to realize his good promises to Ebonyi people.

"Our party men and women, particularly elected and appointed officials who have started taking steps of interest for one position or the other by forming various foundations inview of 2023 to stop such steps immediately or face party sanction; not minding the person's position.

"All should be focused and support the governor in realizing his good promises to Ebonyi people as 2023 is still very far", he said.