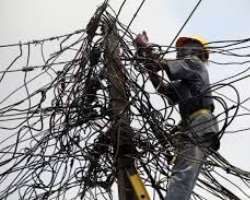 The group in a press statement in Lagos said the lamented that the amount of electricity generated by the nation’s power plants is roving below 2,500 megawatts as at weekend , dropping drastically by over 800MW in 24 hours.

National Coordinator of the group Dr. Austin Iwe Igwe blamed the looming collapase on lack of proper coordination between the Federal Government through the Ministry of Power and all relevant stakeholders in the power sector.

The group said power stations were forced to either shut down some of their units or reduce their generation largely as a result of low load demand by distribution companies, worsening the blackout being experienced by millions of customers across the country. “The power sector is collapsing, our generation is dropping drastically, our transmission and distribution line are in bad shapes, it’s time for government to declare a state of emergency in the power sector.

“The major problem in the country today aside from insecurity is power, therefore President Buhari should re-organize his cabinet and put a more capable hand in the Ministry of Power, so far the Minister heading that Ministry has not impress Nigerians, infact no progress has been made in the power sector under his watch,” Iwe said.

For example, report showed that on September 2, the eight plants were allowed to generate only 465.2MW, after they previously generated 520.2MW.On that day, it disclosed that in Alaoji for instance, two units were out on the instructions of the NCC, just as another two were equally out at the Omotosho plant for same reasons. Again, on

August 30, the plants were allowed to generate only 535.1MW from their total capacities with two units at the Calabar plant also out on NCC instructions to scale down.

The group lamented that the Minister of Power, Sale Mamman is not addressing the issue effectively, “rather he complain of studying the nation’s power sector, even the little achievement recorded under Fashola is fast eroding due to change of policies.

“Many Nigerians don’t even know we have a Power Minister, that’s why you see them still blaming Fashola for power problems in the country, the new minister must roll up his sleeves else the President should kick him out

“The issue of metering was successfully tackled by Fashola through Meter Asset Provider (MAP) scheme, if this scheme which is supposed to be coordinate from the Minister’s office is effective more than a million Nigerians should be on pre paid meter

Currently as its today, no significant activity has commenced under Sale Mamman, the Nigeria’s power sector needs a vibrant and energetic administrator that would be able to tackle the issue headlong, not someone who is still grapping to understand the sector three months after his appointment. “