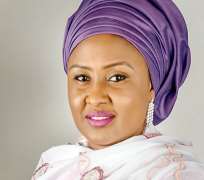 Dear Aisha Buhari,
Her Excellency, the First Lady, Federal Republic of Nigeria, I hope this letter reach you well. I hope you are in good health now. May Allah continue to give you good health and take care of your family.

Madam, I am writing to draw your attention to disappearance of a young man called Dadiata. He was a critic of your husband’s administration and a supporter of former governor of Kano State, Dr. Rabiu Musa Kwankwaso. Dadiata’s case was quite peculiar because he wasn’t arrested, he was not charged for any crime, he just disappeared. We hear he is in the hands of the authority. The authority are claiming he is not in their custody, yet they are not looking for a missing person. Dadiata just disappeared.

Your Excellency, this will not be a good legacy for your husband, the president. Those behind this are tarnishing the image of Mr. President and that of your husband ma. Government come and government goes, you don’t want to come out of government and hear people saying nasty things about the father of your children. If Dadiata was arrested and charged to court I wouldn’t be writing this. I am writing this to you ma, to look into it, ask Mr. President to look into it, because the young man disappeared. We don’t know if he’s alive or dead, nobody knows. It is worrisome. This is not the image you want them to paint your husband’s administration.

Dear Aisha Buhari,
On humanitarian and compassionate grounds, I want to appeal to you to look into this case so that this young man would reappear, dead or alive, if he is alive and committed any crime, no one is saying he shouldn’t be arrested. But to just disappear Your Excellency, is not only strange but it shouldn’t be encouraged in any democracy.

I didn’t address this letter to Mr. President because I have been an ardent critic of your husband’s administration. I don’t want people to think it’s politics. I don’t want it tainted by the dirty politics we play in Nigeria.

Your Excellency, I don’t know Dadiata. I have never met him in person or known him on social media, until his disappearance I haven’t heard of him or about him. Your Excellency, I have made my point. I feel if you interfere, it’s a hunch, that if you do, Dadiata will be released. After his release, if the government feel he has done something wrong, he can be arrested, but just disappear isn’t a good legacy for Mr. President. Thank you ma.

George Onmonya Daniel is the Editor -in-Chief of New Issues