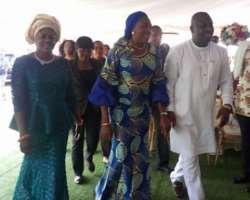 Imo State-born frontline politician, Chief Emmanuel Iwuanyanwu says there is no going back on the emergence of a Nigerian President of Igbo extraction in 2023.

Chief Iwuanyanwu stated this while speaking at the 81stbirthday celebration of political maestro and 4-time Senator, Chief Francis Arthur Nzeribe at his Haven of Peace country home, Oguta, weekend.

He reminded guests at the event that the celebrant, Senator Nzeribe always made a strong case for a Nigerian President of Igbo extraction, even as he argued that the restructuring of Nigeria was long overdue.

“The northern part of Nigeria has ruled the country more than the South. Presently, power is still in the North. In 2023, being eight straight years of the North holding unto power again, under the administration of President Muhammadu Buhari, it is expected that power will shift to the South. When you come to the South, the South West and South Southern part of the country have both produced Presidents. It is therefore the turn of the South East to produce the President of this country, come 2023 in the interest of equity and fairness. These are among the things Senator Nzeribe fought for, in his active days in the Senate and the time has come for its realization. This is non-negotiable.” Speaking on the person of his age-long friend, Senator Francis Arthur Nzeribe, Chief Iwuanyanwu described him as a strong and dependable ally, who stood firmly in the defense of the South East and everything just.

In his remarks at the event, Deputy Governor of Imo State, Engr. Gerald Irona, testified of the philanthropic and patriotic activities of Senator Nzeribe, describing him as a blessing to the country.

Earlier in his speech, Chairman of the occasion and former Vice President of City Bank, United States, Chief Austin Obigwe described chief Nzeribe as a reliable partner, who has made the country proud globally.

“Senator Nzeribe is very reliable. He is a phenomenon. His credentials are very intimidating. He is honoured globally and has always made the country proud. Love him or hate him, he is not someone you take for granted. He is a dogged fighter and always consistent in whatever he sets out to do.”

Adding his voice, Speaker of Imo State House of Assembly, Rt. Hon. Chiji Collins expressed gratitude to God for the person of Senator Nzeribe, describing him as a special blessing to Imo State and the country at large.

Wife of the Governor of Imo State, Lady Ebere Ihedioha, Senator Nzeribe’s wife, Lady Joan Nzeribe, former Minister for Aviation, Dr. (Mrs) Kema Chikwe, Chief of Staff to the Governor of Imo State, Chief Chris Okewulonu, Federal and State lawmakers, Serving and former Ministers of the Federal Republic of Nigeria, businessmen and women, as well as other stakeholders, all poured encomiums on Senator Nzeribe, while praying God to continue to keep him alive, in good health.