Xenophobia: Is Nigeria not guilty of the Worst forms of Xenophobia? 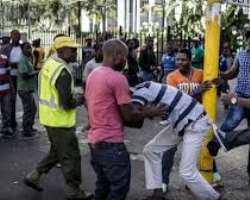 Sequel to the heights of the assaults on the lives and properties of Nigerians as well as other Africans by the South African xenophobes, many analysts and commentators wrote extensively, disproving and condemning the evil perpetrated by South Africans against their kin. Although I share similar sentiments with many commentators, however, in this piece, I tried to add my voice to million other voices echoing out loudly against this ignominious act on the dark continent. This I do after receiving several calls from friends and individuals who for the past couple of months keen-sightedly followed series of my opinion articles and commentaries published both in print and online media outlets on trending public affairs issues.

First, every act of xenophobia expressed in whatever guise in the forms of dislike and/or prejudice against people from other race, country, culture, tribe, region, section, religion and other inclinations as man may deem fit to warrant hatred, apartheid and bias should be condemned by all and sundry.

It beats my imagination to see the same people rescued from the reigns of apartheid and worst forms of discrimination on the basis of their color to repeatedly subject their African relatives to such an ignoble act of intolerance and hatred. It is noteworthy to state that Nigeria as well as other African states played pivotal roles and contributed immensely to the liberation of South Africa (SA) from the white supremacists. That apart, the government of SA did not openly condemn this evil perpetrated by its citizens but gave insubstantial reasons for such atrocities, without arresting and prosecuting such criminal xenophobes initially. It was after much noise and protests by other African countries that the South African government reluctantly apologized; which was an afterthought, ingenuine and a mere subterfuge.

Secondly, although the initial measures taken by the Nigerian government of recalling its high commissioner and sending a high-profile delegation to SA in response to the attacks against its citizens were commendable, the Nigerian government did not sustain such action to indeed deal a final blow to this malady. Also, during the peak of the xenophobic attacks in SA, Nigerians in reprisal attacked and boycotted South African businesses back home. Moreover, the South African embassy in Nigeria was temporarily closed within that period in fear of further attacks.

The crux of the problem is the decision of President Buhari to honor his South African counterpart with a state visit. This singular decision compounded the plight of Nigerians in the hands of the South African xenophobes. Our people were gruesomely killed, their legitimate businesses were attacked, vandalized and looted, and all the president did after these evil and organized crimes against his people was to still visit SA. The manner at which Nigerian officials use taxpayer money on needless and gratuitous foreign trips gives me cold feet. Anyway, this is a discussion for another day.

Worst still, in spite of President Buhari’s state visit to SA (which was unnecessary), the contemptuous treatment and killings of Nigeria in SA still persists barely a few days after his visit. Most recently, precisely October 22nd and 26th, 2019, the recurrence of xenophobic attacks on the streets of SA claimed the lives of some Nigerians and other African nationals. In view of these continuous and unabated xenophobic attacks one is tempted to ask, of what benefit was President Buhari’s visit to SA?

Thirdly, more than other African countries that had casualties from the xenophobic attacks in SA, Nigerians made the loudest noise and ranted in wild condemnation of such heinous crimes against humanity. Suffice it to say, are the sentiments, sectionalism, sectarianism, tribalism, bigotry, partiality, intolerance, prejudice, bias, injustice, unfairness, fanaticism, partisanship, segregation or discrimination on the basis of religion, state and region of origin been perpetrated by Nigerians against one another in Nigeria not worse than the xenophobic attacks in SA? Whereas South African xenophobes mainly attack foreign nationals, Nigerians are daily killed, maimed, harassed, kidnapped, intimated, massacred in cold blood and badly treated by their fellow countrymen without wild condemnation as the case with the former.

Thousands of Nigerians are continuously sent to their early graves by the terrorist Fulani herdsmen, bandits and other miscreants with no help and succor even from the present government while the docile masses kept mute without wild cries. While thousands of qualified graduates roam the streets of Nigeria, slots of jobs are now shared among politicians and highly placed individuals who could buy as much as they can for their cronies and relatives. Competence and merit are now alien in Nigeria. Political appointments are also done on the basis of tribal, religious and regional sentiments with impunity without recourse to ‘federal character’. Are we not worse than the South African xenophobes?

When monies appropriated for infrastructure, education, health, security and agriculture are cornered yearly by greedy, insatiable, gluttonous, ravenous, wolfish, and edacious individuals entrusted with pubic offices without accountability and remorse; are these forms of injustice by Nigerian elites against the masses not worse than xenophobia? When the freedom of speech is threatened, and judges intimidated and the security agencies pocketed while electoral malpractices prevail, are we not practicing worst forms of xenophobia? When our roads become death traps, and our farm inaccessible due to marauding herdsmen and bandits, who have become more vicious, daring and brutal while insurgency continues unabated, are we not suffering worse forms of repression?

Finally, in contrast to what we were made to believe over the years, Nigeria is the ‘giant of Africa’ only in its eyes. We are indeed a shadow of ourselves. Most countries in Africa treat Nigerians with disdain and apathy; hence the continuous maltreatment and attacks. As the United States of America is to the world, so Nigeria ought to be to the entire African continent. Most, if not all African states need us to survive, succeed and flourish, and not the other way round. Let us rise above the petty sentiments, prejudices and injustice, and light up the dark continent. The onus for Africa’s unity, progress and development lie on us; NIGERIA, LET’S ARISE!