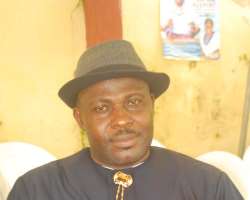 The Deputy Governor who made the remarks while receiving some leaders of Orlu senatorial zone of Imo State in his office Friday evening, described Senator Nzeribe as a dependable leader, whose footsteps are worthy of emulation. Chief Francis Arthur Nzeribe
“You will agree with me that in the history of Orlu zone, Imo State, Nigeria and Africa at large, Senator Arthur Nzeribe has touched millions of lives, directly and indirectly. He is very dependable and takes pleasure in grooming and empowering people. This is the reason why everywhere you go, the moment you mention his name, people appreciate you. No one can tell the story of democracy in Nigeria and Africa at large without mentioning his name, I am proud to be his political son.”

Continuing, Irona described Senator Nzeribe as a freedom fighter, who always stood in defense of the oppressed.

“Ogbuagu is fearless. He has always fought for the Igbo race. While at the National Assembly, he was respected; he was honoured. He was a strong voice. He never allowed his people to be denied of their rights. He is a relentless crusader of justice. He is always ready to stand for the oppressed. Ogbuagu is a freedom fighter. He does not support evil. He is the only person that went to the Senate four times in the history of Orlu zone and Imo state at large. That tells you his level of popularity and acceptance by the masses. Truly, we miss those good days of Ogbuagu’s representation at the Senate. He has built one of the biggest political dynasties in Africa. I am a proud member of that dynasty.”

Adding his voice, a political leader in Oguta Local Government Area and one of the members of the ex-lawmaker’s political family, Hon. Sydney Uneanya described Senator Nzeribe as a philanthropist, whose ways are worthy of emulation.

“Ogbuagu is a super-courageous man; a philanthropist, who, under whatever challenge, cares for his people. He has made very huge investments in humanity. Friendship with him demands time, consciousness, discipline and faithfulness.”

“He is a politician with a difference. He has conscience. He is a father. He invested heavily in human capacity and touched the lives of many. He has done so much for our people and we celebrate him.”

Also speaking, Communication and Development expert, Dr. Walter Duru described Senator Nzeribe as an exemplary leader, who has made indelible marks in the sands of history.

He however made a case for the institution of an annual lecture series in honour of the political icon.

Duru also called for the setting up of an institute for democracy and governance, in honour of Senator Nzeribe.

Senator Francis Arthur Nzeribe clocks Eighty One (81) years on the 2nd of November, 2019.