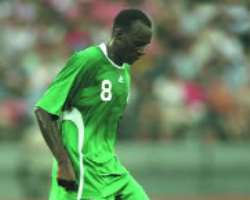 Kaita
Nigeria is taking action over death threats to midfielder, Sani Kaita, who was sent off in the Super Eagles 1-2 loss to Greece in a World cup Group B game last Thursday.

Kaita told the German news agency that he had received death threats via email, and team Media Officer, Idah Peterside, said the Nigeria Football Federation (NFF) had written an official letter to FIFA and the Nigerian government.

“He has received more than 1,000 threats to his email, so we are not taking this lightly.

“We have spoken with the Nigerian minister of sports to inform him about the situation, and we are also writing to FIFA to notify it,” Peterside said.

He added that the minister and other Nigerian officials were disappointed at the development.

“This is just a young man on national service who is trying to do his best. For people to threaten his life is shocking and disappointing.

“He is shaken, but is getting support from his team mates and team officials.”